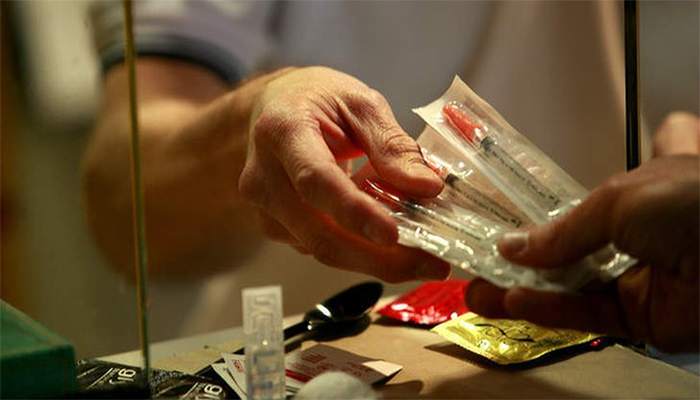 The Blue Point (Kék Pont) infection prevention facility has closed its needle exchange in Budapest’s District VIII (Józsefváros) due to a lack of financing only months after the HIV virus reappeared in the troubled area for the first time in nearly a decade.

Since 2006 the unit had been Hungary’s largest such facility, offering some 3,000 intravenous users new needles and a support network to fight addiction and prevent the spread of HIV and hepatitis. The foundation had asked the state to increase its annual support from HUF 6 million (USD 26,000) to HUF 30 million (USD 135,000) but was turned down. Experts now fear HIV may spread rapidly across the capital.

Civil Liberties Union (TASZ) drug policy program director Peter Sarosi says “I have heard of two or three infected people in Józsefváros, and one in District XIII as well,” adding that “once such an epidemic rears its head, it spreads very quickly.”

Opposition politicians say Fidesz is to blame for the demise of Blue Point needle exchange program, which according to the UN is one of the most effective ways of preventing infections. Nevertheless Fidesz’s District VIII politicians refused to answer the questions of weekly Magyar Narancs on the closure, despite councillor Orsolya Ferencz’s earlier assurance that she is committed to fighting drug problems in the district, and would even support the creation of a safe injection site.

Democratic Coalition (DK) politician Erzsébet Gy. Németh said the lack of support for Blue Point “totally fits in with (Budapest mayor) István Tarlós’s ideas of making those living on the periphery of society, such as drug users and homeless people, disappear from sight – ‘what I don’t see, doesn’t exist, is not a problem’,” she added.

Together-Dialogue for Hungary (Együtt-PM) blamed District VIII mayor Máté Kocsis for the closure. Együtt-PM District VIII mayoral candidate Gábor Erőss said “Blue Point is not leaving because it wants to but because Máté Kocsis has chased them away. (…) He likes to make enemies, mostly from the most vulnerable groups (be they homeless or addicts) so that he can move against them as the heroic savior, bringing order. But sweeping the problems under the carpet does not make them disappear: the root of the problem will stay and will get bigger.”

Hungarian Socialist Party politician Márta Révész says it is a “huge misunderstanding that the Blue Point Foundation is responsible for the high number of drug addicts in the District VIII”.

“There is a group in District VIII that needs help. Before, when there were a lot of prostitutes in the district, the healthcare system treated them as well, they helped them with medical check-ups and advice. We need that now too,” Révész explained.

In addition to the fear of widespread infection, opposition politicians warn that delinquency (such as the black market sale of used needles) might rise in the district. Extremist Jobbik politician Attila Pintér, on the other hand, was very happy with Blue Point’s decision to leave the district: “Citizens can be happy and relieved that drug addicts will disappear and they won’t shoot up here, or leave their drug waste in the district.”

Erzsébet Gy. Németh conceded that drug-related waste is a big problem for voters in the district, but said chasing away the only organization that could provide a long-term help is definitely not the solution to the problem.

Sarosi agreed, saying “many accuse needle exchange of bringing drug use to the district, whereas the cause and effect relationship is the contrary. In 2006 needle exchange buses were operating across Budapest, and Blue Point moved to District VIII because they detected much more drug use here than elsewhere”. The exact number of HIV-positive people will be published in the next quarterly report of the National Public Health Service, Sarosi explained.