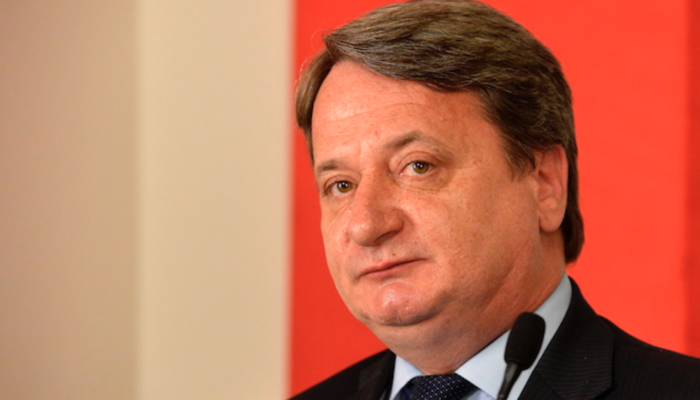 Jobbik MEP “KGBéla” Kovács, accused of spying for Russia and budget fraud, has finally appeared at the office of the Central Detective Chief to answer to prosecutors, reports news site hvg.hu.

Kovács, who has long been sought by authorities, walked into the building of the Central Detective Chief Wednesday morning, telling representatives of the press that it is in his own interest to close the criminal case against him as soon as possible.

“If you feel like it and you have enough evidence against me, raise charges against me. I would really like to clear myself in court. […] However if there is not enough evidence, I would like to ask to finish the proceedings, there is no place for this in the future,” Kovács told the press, adding that the whole case is a “prefabricated action of Fidesz” against him and Jobbik.

Kovács was expected to appear before prosecutors earlier but due to a “chain of unfortunate events,” he failed to arrive for questioning. Pro-government daily Magyar Idők alleged that Kovács was hiding in the partially-recognized breakaway state of Abkhazia, in the Caucasus mountains, and Hungarian authorities could not apprehend him even with an international arrest warrant due to Abkhazia’s lack of international recognition.

Kovács later refuted these claims by posting a photo of himself holding a daily newspaper in Brussels. He told the daily Népszava that he had indeed been in Abkhazia on vacation, and claimed he had stepped on something in the sea after which he had to be hospitalized. He said poor network connection in Abkhazia meant he could not inform Hungarian authorities he would not be able to appear at his questioning.

Kovács was accused in 2014 of spying for Russia. He denies the allegations.