Lajos Bokros: The government of Hungary has no economic policy 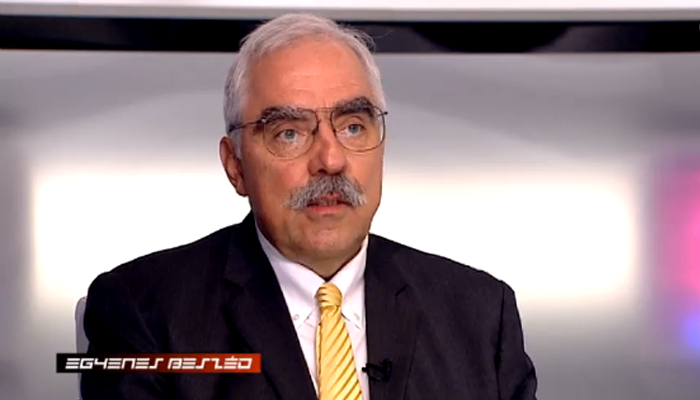 The government has lost the war against the banks, says Lajos Bokros, chairman of the Movement for a Modern Hungary (MOMA).  Bokros told ATV that the state is acquiring an interest in the Erste Bank, and the bank tax is going to decrease gradually from year to year, but we do not know the details.  There was no point to the transaction.

Hungarian Prime Minister Viktor Orbán, European Bank for Reconstruction and Development (EBRD) president Sir Suma Chakrabarti and Erste Bank CEO Andreas Treichl signed an agreement on Monday providing for the EBRD and the Hungarian state to each acquire a 15 percent share in the Hungarian bank.  The price of the shares will only be determined in May.  Part of the agreement is that the govenrment will bring the bank tax in line with the European average by decreasing it HUF 60 billion in 2016, and a smaller amount in 2017.

Former minister of finance Lajos Bokros told ATV’s Egyenes Beszed (Straight Talk) on Tuesday night that it is necessary to differentiate between the acquisition of shares in the bank and the decrease in the bank tax.  If negotiations took place regarding the bank tax, and the government made concessions, then it appears that its war against the banks and holding them to account was not successful.

Instead, it had succeeded in freezing lending activities and braking economic growth to the point where Hungary was “gasping for breath.”   The government must confront the fact that taxes of this size on turnover and not profits were destroying the bank sector, whose business activities served the country.

“The final result of this senseless struggle and unholy war is that lending has disappeared in Hungary,” said the former finance minister.

In an economy where there are no natural resources, the only possibility of success is in competitive labor, which can only be performed if there are investments, either foreign or domestic, he said. Money was needed for investments, and part of that was credit.

“Acquiring an interest in banks is a completely independent matter.  From the point of view of the Hungarian state there is no point to acquiring a 15 percent interest in a bank.   There may be a point to the transaction from the point of view of EBRD and the Erste Bank in that they can expand using other people’s money.  If this enables the bank to raise its capital, then it does well.  The Hungarian state and the Hungarian taxpayers certainly do not do well because at best they contribute to the growth of the bank without obtaining the right to run the bank.”

Bokros believes that behind the transaction is the conviction on the part of Orbán that Hungarian State ownership in the economy is something that should be increased.  “They bought the Budapest Bank, they bought the Hungarian Foreign Trade Bank and now they bought part of the Erste.  There was no point in any of these transactions.  They are pointlessly wasting taxpayers’ money,” says Bokros.

“The Hungarian government has no logical, professional or honest economic policy.  It wastes taxpayers’ money however it likes.  As a result of this, 15 percent can be one of the holy proportions that it wants to achieve in any event, regardless of whether there is any point to it or not.”

Bokros believes it was a strategic mistake for the government to acquire 15 percent without first agreeing on a price.  But even if the state had agreed to purchase 100 percent of the bank, there still would not have been any point because the state has no business being in the banking sector.

“If they nationalize banks, then this is what they call Socialism.  We tried this for 42 years and there was no point to it.”