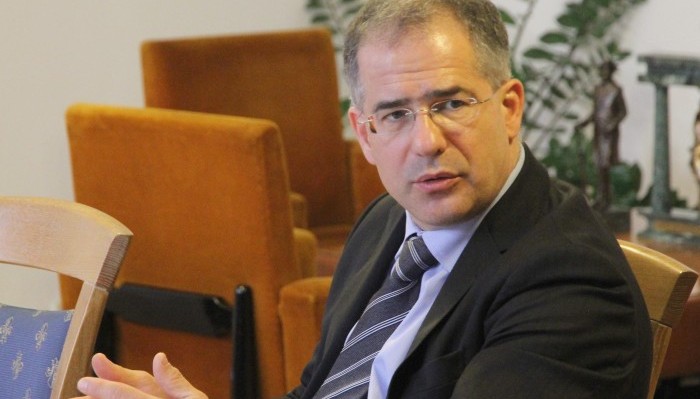 Kosa described as “life-threatening”  the apparent willingness of Hungary’s opposition parties to collaborate with anyone without having any shared principles and only for the sake of acquiring power.

A transcript of the interview is provided below:

85 percent of the country will have the opportunity to vote for the Fidesz-KDNP coalition during this year’s local government elections scheduled to take place in autumn. The coalition will be nominating candidates in 1167 municipalities around Hungary.

The situation is the following: if someone wants to win they need to be better and more likeable than all their opponents. In this case, having to be concerned with our hopeless opponents isn’t even the trouble, so we’re not even going to deal with that.

But it’s clear that the left – if you will – is trying to gain the support of far-right parties. One such example is that of their candidate for the city of Miskolc. How do the Christian conservatives see this?

This is emblematic of what they’ve said earlier, for example Gergely Karacsony, in which they say that they shouldn’t turn away from ‘technical’ coalitions. This means that they will partner up with anyone despite not having a single uniting fundamental principle or common agreement.  They would even partner up with the red-hoofed devil itself for the sake of acquiring power.

That’s why this is incredibly dangerous because consider what happens if they win the municipal elections and get into a leadership position. What happens then? How will they work together when they can’t even say hello to each other like normal people, and aren’t on speaking terms with their own people? They aren’t even able to sit down and have a discussion over coffee for a few minutes.

The fate of people, cities and villages is what’s at stake. It would be life-threatening if people cast their votes for the opposition in its current condition because nothing meaningful can come of it. Their common platform is only to acquire power. That’s it.

I don’t want to waste our interview discussing the socialists but please allow me to ask one question. It appears they, as well as people affiliated with them, are trying more and more to do what Fidesz-KDNP did in 2010 with Istvan Tarlos. However, the difference is that they want an even more politically independent candidate for the post of Budapest’s mayor. There has been mention of this candidate even coming from the world of theater.  It’s plausible that an actor from a theater can be a fantastic administrator but what do actors know about leading a city? This looks like it can be life-threatening.

Look, this is a profession. It’s not coincidence that when we want to undergo surgery at a hospital, we’re not looking at what color the doctor’s hair is or whether he can read poetry beautifully. Would you feel safe if the doctor said, “Look, I haven’t ever performed surgery but I’m really good at performing Hamlet.”? What is a person supposed to think if this happens? (laughs) Good God! It really looks like their medication rolled away from them. They need to find it quick or else there are going to be big problems.

Let’s talk about the important issues. How can Fidesz-KDNP find its balance? During the coalition’s election convention, in addition to deciding on the city leaders they also decided on the county leaders. In earlier years we saw that the coalition put significant attention on the capital city but was also able to put maximum attention on the rural communities. How can this continue in the upcoming cycle?

Fidesz has been a country-wide organization from the beginning.  In fact many of the party’s founder come from rural communities. Therefore, it’s not a daunting task for us. It’s simply a fact that we need to be concerned about all municipal bodies, from the rural communities to the capital. Truth be told, we are continuously thinking ahead and that’s why we think that the most important issue for the upcoming municipal government cycle will be the creation of jobs and strengthening the economy. We are calling on the leadership of local governments to take part in our program, which has the purpose of turning 60 percent of the European Union development funding over to the development, strengthening and support of small- and medium-sized businesses. Through this we can create more jobs, through this we can grow the GDP, through this we can increase our exports. Therefore, truth be told, we didn’t go out looking here and there for mayoral candidates.  Instead we specifically look at this aspect which says, if possible, we need to ensure the most possible candidates who agree with this program, whose talents are related to this, who can help this program.

Recently, job creation and economic stimulus were the key words. It seems that these are still key words for not only the national government but it’s also expected of the local governments.

The previous cycle was concerned with other things because there was a bunch of pressure on national government and local governments because we had to clean up the catastrophe that the socialists caused.

We should forget consolidation of debt.

That’s what I’m saying, the consolidation of debt wasn’t about our program to create jobs, it was how we dealt with the crisis.

I’d like to know how it is possible to help those regions that aren’t in the west of Hungary who contribute more to the economy, and still embrace those regions, villages, cities that still need to catch up. How is it possible to pursue both issues?

There’s nothing hard about this. The more difficult issue is that of the central administrative region because the capital and Pest county are so advanced economically that its level puts it in the top 70 percent of the European Union’s average of advancement. This means it makes it difficult for us to provide support for the central administrative region with EU funds with additional investments for development. Therefore, cities like Gyor, Zalaegerszeg, Szekesfehervar  and Debrecen are in the very dynamically operating rural regions that haven’t reached this level of advancement. It’s not as difficult to address them as it is in the case of Budapest where EU funds can only provide certain kinds of support. For example, we’re working on making sure that public transportation and infrastructure development receive support.

How can this be solved? Are EU funds not being taken away from the capital city and Pest county as we’ve read about many times?

That being said, there will definitely be a solution to this?

If we are already on the topic of Brussels, you probably weren’t surprised to learn that the European Commission would not stop with its series of attacks against our homeland. This Csaba Fodor, the CEO of Nezopont Institute, explained here on Lanchid Radio that the signs of this are already clear, for example the Commission’s announcement this week which mentioned the so-called Excessive Deficit Procedure. There was also another incident in which former SZDSZ political Matyas Hersy claimed that Fidesz didn’t support Juncker’s nomination because if the Commission ever took up issue with Hungary, then Fidesz could automatically call his nomination illegitimate.

But returning to the local governments, specifically the mayors, aside from standing up for our homeland’s interests, the municipalities should also back one specific person.

We had completely different reasons for believing that Juncker was not the man to lead the European Commission. This European tandem which is made up of Juncker and Schulz is one of the worst scenarios that could happen. In fact, the whole thing perfectly supports the people`s belief about Brussels that its purpose is to give a position to those people who are no longer needed by their own countries, whose reputations are in shambles and who have become embarrassments. (laughs)

This scenario is not good for the European Union, that’s for sure.

Can we still continue to be so combatitive in the next EU cycle? There’s a bunch of laws like the one concerned with the debtors holding these foreign exchange-denominated loans – which is a Hungarian speciality for which we can thank the previous socialist government – but are there any laws and directives that we could give to the EU that they could incorporate? Because now we have pretty serious representation in the EU.

We let them know what our criticisms are regarding how the EU operates, its bureaucracy and its exorbitant administrative burdens, but we don’t feel the need to show the EU which direction it should go. In fact, it wouldn’t even be good if that was how it worked. Instead, based on common interests, common actions and programs, everyone tries to reach a compromise that is good for Europe and good for their own countries. Therefore, we are not huge believers in these directives coming from Brussels. I think that what we can do is tell everyone what we’re doing here and tell them that it’s a success. If people want to accept this or not, everyone can do that based on their own interest. For the time being…(inaudible)…we can always use the opportunity in every forum to let the EU know that Hungary’s government’s interests and the interests of the Hungarian nation must be represented. There are particular interests related to our situation today thanks to the consequences of the Trianon dictatum. We have particular interests in making sure that we continue our kind of economic policy as a country of the EU that is catching up without having our progress stopped by the economic interests of bigger countries, for example, the common taxation policies. But beyond this, how should I put this, we have enough things to deal with here at home and we don’t feel compelled to force Europe to do anything.