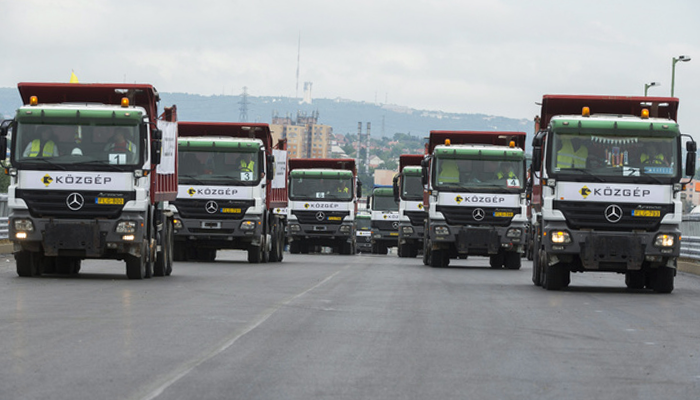 Over the past five years Közgép Zrt., the construction company owned by former Fidesz party economic director Lajos Simicska, and Közgép-led consortia have won over HUF 900 billion (USD 4.2 billion) worth of public tenders, including 90 public tenders in 2013 worth HUF 380 billion (USD 1.8 billion).  Five of those tenders worth HUF 32 billion were awarded between 23 December and 26 December of last year.

Under Simicska’s stewardship Közgép has gone from being a modest erector of metal structures to becoming Hungary’s largest construction company by winning government contracts to build highways, bridges, railroads, and most recently to build radioactive material storage facilities.

Many of these projects involved a large degree of EU funding in the form of structural grants.

Index.hu reports that last year Közgép or Közgép-led consortia won 17.2 per cent of public tenders issued by the National Development Authority (NFÜ), including a HUF 65 billion (USD 300 million) contract to build a 33.4 km section of the M86 between Hegyfalu and Csorna.

At a time when most Hungarian construction companies have struggled to survive, Közgép has prospered, paying substantial dividends to its owner every year for the past six years. Last year dividends amounted to some HUF 3 billion (USD 14 million).

Közgép’s future prospects are good, especially if the current government is returned to power in April.  Within the framework of the Transportation Improvement Operative Program (KOP) Hungary is to receive HUF 900 billion (USD 4.2 billion) in EU funding over the next seven years to fund the kinds of large, government projects (highway construction, rail reconstruction) Közgép has proven adept at winning at public tender.

An additional HUF 800 billion (USD 3.7 billion) in EU funds will be made available via the Environment and Energy Efficiency Operative Program (KEHOP). Közgép reportedly owns a number of companies dealing in renewable energies.  One such company, Elios Zrt. (formerly E-OS Innovatív Zrt.) won HUF 2.5 billion (USD 12 million) worth of public tenders in 2013, both individually and as part of various consortia.  Perhaps this explains how Prime Minister Viktor Orban’s son-in-law, Istvan Tiborcz, came to sit on that company’s board of directors.