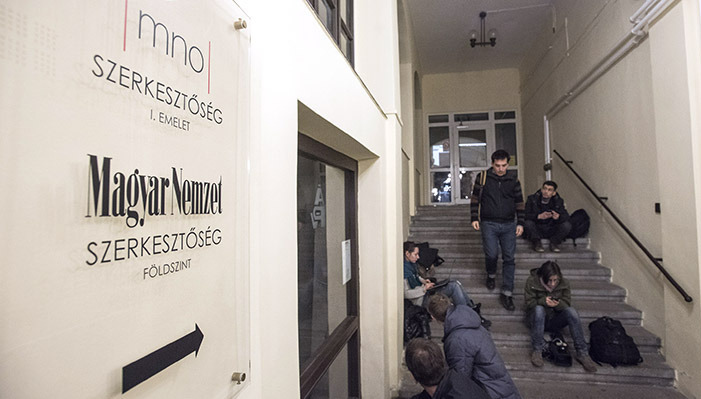 There are still no signs of a halt to the government-critical tone promised by Fidesz oligarch and media mogul Lajos Simicska after he gave a series of telephone interviews on Friday accusing Prime Minister Viktor Orbán of orchestrating a coup against him.  Instead, Magyar Nemzet, HirTV, Lanchid radio and Class FM have adopted a neutral tone on most domestic questions, although occasionally reporting news implicitly critical of the government’s social policy.

For the most part Hungarian state media failed to react to Friday’s shocking developments.  By contrast, competing right-wing Magyar Hírlap attacked Simicska for being “out of his mind.”

Some division is already visible in the rightist media after Simicska openly fell out with Orbán, calling him a “geci” (sperm) in interviews with numerous independent media outlets last Friday. Simicska reportedly ordered his part of the rightist media empire to alter its tone after Friday’s mass resignation of editors-in-chief and CEOs, which was prompted, according to at least one anonymous source, by Simicska instructing them to attack the prime minister more vigorously than before.

Simicska himself refuted such claims in an article appearing in Magyar Nemzet. The paper, and its online publication, was a long-time, fervent supporter of the Fidesz government. Magyar Nemzet‘s new editor has promised that the paper will continue to “promote Hungarian national values and interests.”

“For me the sanctity of the family is most important including mine and others as well.” the media mogul explained to the paper, adding that he would never ask his employees to attack Orbán’s private life or family directly. He added that the only thing he wants to achieve is “an independent journal,” claiming he does not plan “to interfere with the content of HírTV or Magyar Nemzet in the future.”

On Saturday Magyar Nemzet published an article suggesting that a proposed amendment to the controversial advertising tax that would place a flat 5 percent tax on all advertising revenues was behind Simicska telling left-wing daily Nepszava last Thursday he will “start a full-scale media war” against the government.

State-owned television broadcaster MTVA, which Orbán announced last month will become the official mouthpiece of the government, thereby depriving pro-government media outlets of their raison d’être (and government advertising revenues), was restrained in its coverage of the scandal. Friday evening news only briefly mentioned Simicska’s comments, saying that he promised a media war against Orbán. After summarizing the oligarch’s position that the mass resignation was a de-facto coup against him organized by Orbán, the news presenter announced “verbal accusations against the prime minister will not be presented in the television as they are beyond good taste.” MTVA’s online news later published an additional article summarizing the coverage of the scandal in the foreign press. In this they cited the general interpretation abroad that recent events may cause a “media war” in Hungary.

Many in the Hungarian media suspect that those leaving Simicska’s publications will end up working either for the restructured state media empire or for one of the pro-government media outlets owned by Fidesz oligarch Gabor Széles, whose flagship daily Magyar Hírlap openly accused Simicska of losing his mind. Initially, Széles invited Simicska’s former employees to work at his journal.  In an interview given to his own newspaper, Széles then accused Simicska of being “harmful but only to himself” and predicting a “world war” of Hungarian media publications following his comments. According to Széles, Simicska has “no chance of winning this war”, adding that “Orbán and his people would have never attacked Simicska like this without making sure that he cannot cause significant harm.”

He also said that Simicska’s media “can easily be replaced by the state media and my newspaper.”