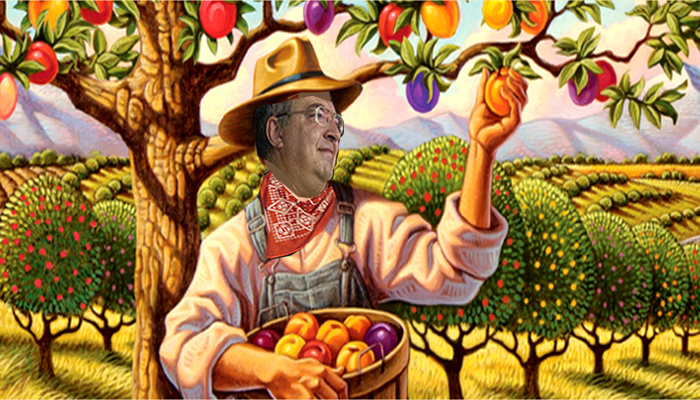 Viktor Orbán’s college roommate, Lajos Simicska, is not only one of Hungary’s richest advertising and building magnates thanks to a series of lucrative, EU-funded government contracts.  It turns out Simicska is also one of the largest farmers of state-owned land.  This, in turn, makes his companies a major recipient of EU agricultural subsidies of HUF 70,000 (USD 275) to HUF 100,000 (USD 392) per hectare per annum, plus whatever additional grants they receive for “countryside development”.  (One enterprising state secretary at the Ministry for Agriculture managed to obtain subsidies and grants totaling HUF 32 million (USD 130,000) after just 70 hectares in 2014).

On the basis of documents obtained from the Ministry of Agriculture, Blikk writes that companies owned in whole or in part by Lájos Simicska are cultivating over 1500 hectares of state-owned land on the basis of contracts awarded outside of public tender.

Blikk says over 30,000 hectares of state-owned ground are being cultivated by individuals or companies in this way, including Felcsút mayor Lőrinc Mészáros‘ Aranykorona Zrt. which has contracted to cultivate some five hectares of state land near Székesfehévár.  (This is in addition to the over 1000 hectares of state ground awarded through public tender to Mészáros’company and family members in and around Prime Minister Orbán’s home town of Felcsút).

Blikk reports that Sándor Csányi’s Bólyi Mezőgazdasági Zrt., which cultivates tens of thousands of hectares owned by Csányi through various entities, also contracted to cultivate some 4 hectares without a pubic tender being issued.

Blikk writes that when turning over the documents, state secretary for state-owned grounds Márton Bitay told Kozák that beginning 2015 the government would only award contracts without tender in the case of state grounds exceeding 3 hectares in “extraordinary” situations.