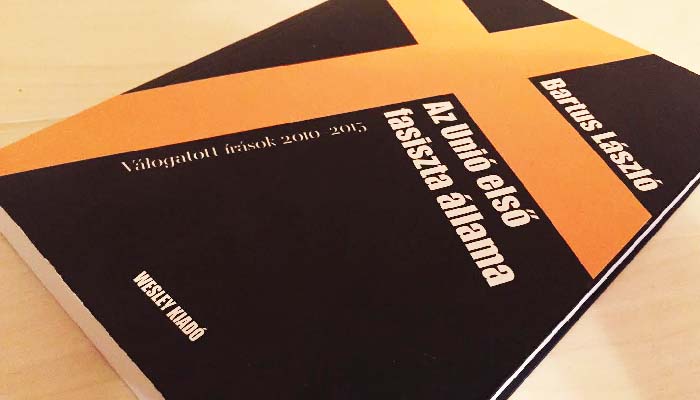 “Which of these is not true about the Orbán system?” – László Bartus

László Bartus, publisher of the US-based Amerikai Magyar Népszava, has published his sixth book, “The (European) Union’s First Fascist State”.  Over 100 people attended the book launch at John Wesley Seminary. Bartus, who resides with his family in the United States, joined the event via Skype and took part in a discussion with Gábor Iványi, head of the Hungarian Evangelical Fellowship, a Methodist church.

“The Union’s First Fascist State” is a collection of some 100 pieces published by Bartus in the electronic pages of Népszava.com between 2010 and 2015.  When asked whether the title wasn’t over-the-top, Bartus responded that the Orbán regime has many of the characteristics of a fascist regime.

“It has an authoritarian leader in an authoritarian system: nationalism, workfare society, mass mobilization, political violence against political opponents, anti-communist rhetoric (even if there are no communists aside from those pointing fingers like László Kövér), anti-liberalism, disregard for the liberal democracy, statism, the subordination of the state to the leader, the undoing of institutional independence, curtailed freedom of the press, praise of the strong leader, building of national capital, the demonization of non-national capital, corporatism, quasi-militia groups used against the people, anti-democracy, the never-ending war (rhetoric), the vilification of those who do not belong to the power structure’s political family, curtailing the power of unions and the right to strike, the pronouncement of a ‘new era’, the rebuilding of national symbols, propaganda, lies, demagoguery, xenophobia, anti-semitism, and the main goal of retaining power. These are all the things that I could come up with off the top of my head,” said the author. “Which of these is not true about the Orbán system?”

Known for his lengthy and hard-hitting opinion pieces, Bartus has drawn plenty of criticism and praise from Hungarians around the world. He has published numerous books deeply critical of Hungarian society and the elements he feels undermine Hungarian progress and democracy.

Writer Rudolf Ungváry says “the author of these articles does not let himself be deceived by that ‘reality’ in which Hungary’s mainstream politicians and journalists live.”

The book, published by the Wesley Publishing House, has yet to hit bookstores but can be ordered directly from the publisher.