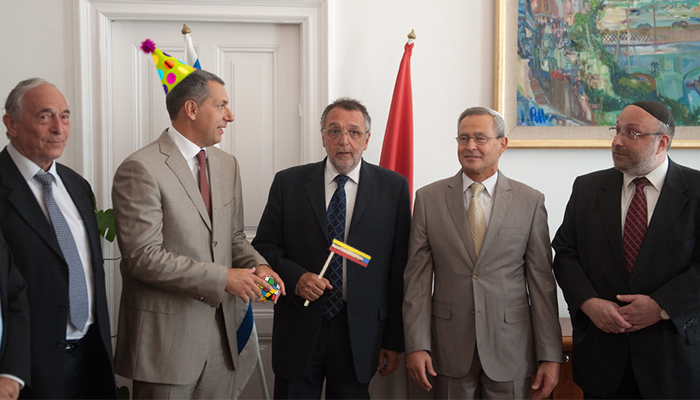 The future of the “House of Fates” Holocaust museum and plans to erect a statue of Second World War-era politician Bálint Hóman in Székesfehervár were among topics discussed at a meeting on Tuesday between János Lázár, Minister in Charge of the Office of the Prime Minister, and representatives of the Hungarian Jewish Alliance (Mazsihisz).

Shortly after the meeting, Lázár told the press that there were “a number of questions in which there is complete agreement, and there are questions about which we do not agree.” Mazsihisz president András Heisler called the discussions “cheerful” and “constructive”.

With regards to the controversial “House of Fates”  Holocaust museum, the government continues to insist that the institution will only open if there exists consensus among the Jewish organizations.  Heisler maintains that no such consensus will be forthcoming so long as revisionist historian Mária Schmidt remains in charge of the project.

Schmidt has publicly accused Hungary’s Jews of exploiting the Holocaust for their own personal and political gain.  She seeks for greater emphasis to be place on the collective trauma experienced by all Hungarians, Jews and Gentiles alike, during the Second World War and on individual acts of courage displayed by scores of Hungarians in an attempt to protect their Jewish neighbors.

Last year’s erection of a controversial statue in Budapest’s Szabadság square reflects the historical line of argument pioneered by Schmidt, according to which Nazi Germany bears primary responsibility for the deportation to Auschwitz of some 437,000 Jews in 1944 having effectively staged a putsch in March of that year.

Schmidt’s revisionist historical theories have been widely criticized at home and abroad as “ahistorical”.  Nevertheless, the Terror House director exerts enormous influence over Prime Minister Viktor Orban and the ruling Fidesz-KDNP political establishment, in part because she is very affluent.  Perhaps in order to ensure that her theories continue to hold sway, Schmidt has founded her own media company to help fill the void created by a falling out between media mogul Lajos Simicska (Magyar Nemzet, HirTV) and Orbán.

Heisler confirms that both Mazsihisz and the Jewish World Congress have asked András Cser-Palkovics, the Fidesz mayor of Székesfehervár, Orbán’s birthplace, to abandon plans to erect a statue to Second World War-era politician Bálint Hóman.  Convicted to life in prison for serving as a member of parliament under the fascist government of Ferenc Szálasi, Hóman was rehabilitated by the Metropolitan Court of Budapest on March 6, 2015.