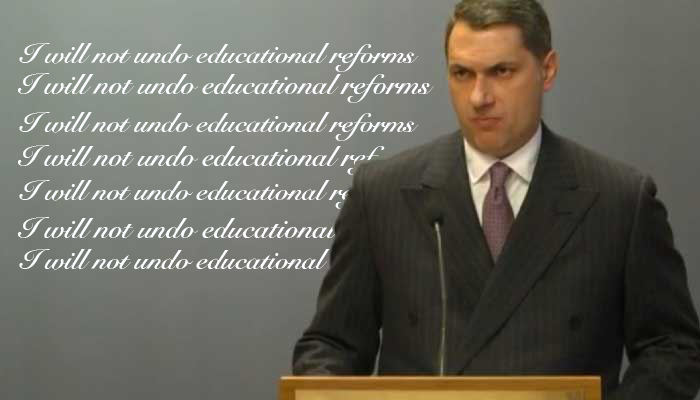 Hungary’s public education system had failed prior to far-reaching reforms under the second and third Orbán governments, said János Lázár at his weekly marathon press conference on Thursday.  The Minister Overseeing the Office of the Prime Minister said there was no chance of returning public education to its pre-2010 status.

The Chancellor was responding to demonstrations on Wednesday in 12 Hungarian cities.  Teachers accompanied by students and parents demanded fewer subjects and a radical decrease in administration.  They called for the restoration of institutional autonomy and the right to freely choose textbooks.

The Teachers Trade Union (PSZ) has called for a demonstration in front of parliament on Saturday, February 13.  In a press conference on Monday, trade union president Mrs. István Galló stated that unless changes to public education are made, teachers will have no choice but to strike.

Lázár said the government was prepared to discuss education but asked that politics be kept out of the schools.  “Any attempt at restoration is inconceivable,” he said, pointing out that student performance has been declining since 2002.

On the subject of the controversial Klebelsberg Institution Maintenance Center (Klik), the central state agency for managing schools, Lázár said its leaders could not “give something out of nothing,” and it was necessary to see whether Klik had been allocated sufficient resources.  He said he did not believe Klik to be a complete failure and it was necessary to examine what caused the problems.

In response to the teachers’ demands, Lázár said the number of lessons and the number of students per teacher was lower in Hungary than the OECD average.  He said Hungarian teachers were only required to teach between five and six thousand lessons a year, whereas in Austria the number was more than six thousand, and such statistics need to be reconciled with teachers’ experiences.

He neglected to mention that in Austria starting teachers earn many times more than their Hungarian counterparts.

Lázár said that if the teachers’ representatives were really looking for solutions to the problems of public education, they could not reject the government’s offer to hold multi-party roundtable discussions.

“If the goal is conflict, we will not understand each other,” he said.