Lázár says he did not bug NGO’s office 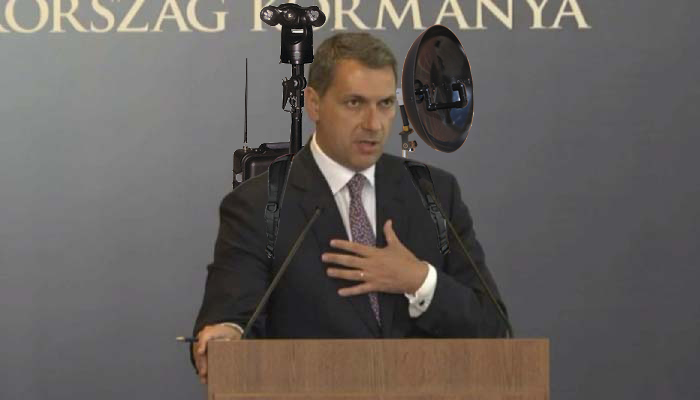 Minister Overseeing the Office of the Prime Minister János Lázár and government spokesman Zoltán Kovács held the government’s 53rd-ever marathon press conference Thursday afternoon. While much of the almost three-hour event was a regurgitation of issues addressed previously, a handful of new developments were tackled by Lázár.

Remarkably, he avoided mentioning the name of the government’s favorite bogeyman, George Soros, the billionaire American philanthropist of Hungarian heritage whom Lázár claimed two weeks ago is in cahoots with President Obama to inundate Europe with Muslims.

The Eötvös Károly Institute, one of numerous Hungarian NGOs that receive funding from Soros’ Open Society Foundation, announced yesterday that it had found a surveillance device in their office that was apparently monitoring their wi-fi and use of the internet.

Lázár denied that the bug was planted by any of the state’s multiple security services.

(On the subject of surveillance, the European Court of Human Rights in Strasbourg this week rejected an appeal by the Hungarian government regarding the court’s January ruling that the Hungarian state’s practice of clandestine snooping on citizens without judicial oversight violates the right to privacy. Hungary must now enact legislation in accordance with the court’s decision. By remarkable coincidence, the lawyer who represented the plaintiffs in the Strasbourg case is László Majtényi, the president of the same Eötvös Károly Institute that found the bug).

Lázár says neither he nor the state had anything to do with this bug.

“According to the interior ministry, someone [used] a cheap 20 thousand Ft thingamajig. The state most certainly did not bug the Eötvös Institute. Many in the government were confused when asked [about the bugging] because few people even know what the Eötvös Institute is,” Lázár said.

He also discussed the government’s “Healthy Budapest” program. According to Lázár, the city’s health-care sector cares for about 4.3 million Hungarians at a total of 25 health-care facilities. Of the 25, 18 operate under the supervision of the Hungarian state.

All this had prompted the government to decide now that Budapest needs four new “health-care centers” or “super hospitals”.

Lázár confirmed reports that the government would take the highly controversial KLIK national education overseeing agency and turn it into 58 mini-KLIKs. This latest “reorganizing” comes only a few years after the government centralized the education system. According to Lázár, the decision to reorganize one bad KLIK into 58 mini-KLIKs comes after a series of consultations with its own hand-picked professional organizations and unions. This, however, is a bit of stretch. The Tanitanék movement, comprised of educators and parents (Tanitanék: I would teach), has still not had its demands met and will be holding another protest on Saturday, June 11th.

Lázár said the government wants to close down all refugee camps in Hungary but is contemplating opening a “transit zone” for asylum seekers in Ásothalom, Hungary, near the Hungary-Serbia border.

According to him, this will be discussed at Friday’s governmental meeting.

The mayor of Ásothalom is László Toroczkai, the man responsible for co-founding the Sixty-Four Counties Youth Movement, a radical right-wing group. Toroczkai maintains very close ties with Jobbik and other far-right extremist organizations.

Regarding the government’s punishing of one of its favorite oligarchs, FHB Bank CEO Zoltán Spéder, Lázár said he does not want to comment on the matter because Spéder is and always will be his friend.

The government recently launched a campaign to strip Spéder of his influence on the sector it pretty much handed him on a silver platter after nationalizing the sector.

But Spéder must have done something really bad because the government isn’t only passing laws one day to the next that end his influence over the country’s savings cooperative sector. The pro-Fidesz media is also clearly intent on assassinating Spéder’s character.