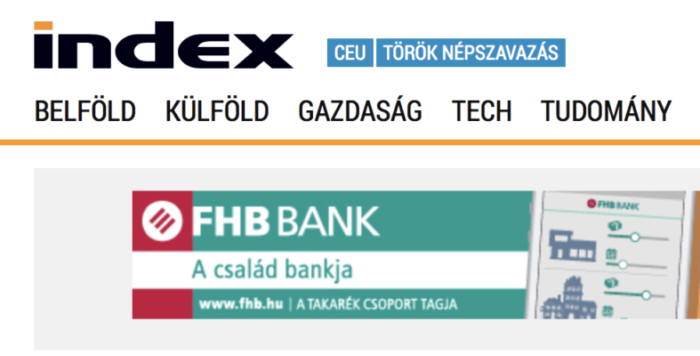 Leading Hungarian online daily index.hu has changed owners, according to 24.hu.  The last and most important of Zoltán Spéder’s media holdings has been sold to a foundation run by individuals close to former Fidesz oligarch, construction and media mogul Lajos Simicska.

Index.hu’s publisher was purchased by Pro-Ráta Holding Zrt., which concluded an option agreement to acquire the leading daily online in February 2014, 24.hu has reported.  Pro-Ráta, whose media holdings include conservative print daily Magyar Nemzet and HírTV — former pro-government media outlets that turned critical after Simicska fell out with Prime Minister Viktor Orbán in early 2015 — immediately transferred its shares in the publisher to the Hungarian Development Foundation (Magyar Fejlődésért Alapítványra).

According to a statement published by index.hu, the foundation acquired the daily online in order to continue to ensure “its leading market position, quality content, independence, and ability to reach the widest audience possible.”

The foundation’s board of trustees includes business associates of Spéder and Simicska, including the chairman of Közgép Zrt. and Mahir Zrt.’s supervisory committees, Dr. Csaba Nagy Ajtony, and László Bodolai, a lawyer who has handled Spéder’s and index.hu’s legal affairs for the past twenty years.

24.hu reports that the new owner does not plan any management changes.

Spéder evidently felt compelled to sell off a number of business interests after falling out of the good graces of the Orbán’ government for reasons that have yet to be adequately explained, but may have involved Spéder coming under pressure to transfer ownership of various media outlets to members of the prime minister’s inner circle.

The apparent mastermind behind the nationalization and subsequent reprivatization of the Takarékbank in 2013 in which the latter came under the control of the FHB Bank of which Spéder was CEO, president, and the largest shareholder, Spéder sold his shares in FHB (although to this day it continues to advertise on index.hu) after he became the subject of a criminal investigation, culminating in a police raid of his home. In November of last year his media holding company, CEMP Zrt., sold the publisher of online news portals portfolio.hu and penzcentrum.hu to members of their management team.