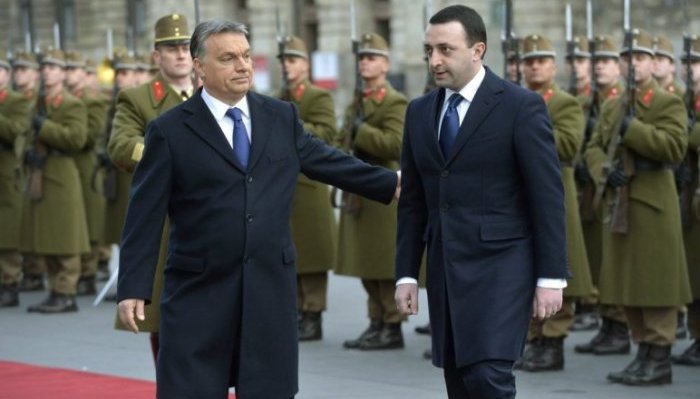 The Georgian Prime Minister visited Budapest on Tuesday.  Irakli Garibasvili agreed with Hungarian Prime Minister Viktor Orbán that both countries needed to exploit the hidden economic opportunities.  Foreign policy expert András Léderer told ATV that it was a good thing Hungary was open and ready to assist, but that it was another question how this fits in with Orbán’s “Russian politics.”

According to Orbán, Georgia’s role is more important than ever to Europe now that the South Stream gas pipeline project has been cancelled.

Orbán announced that Hungary recognizes Georgia’s struggle to ensure its territorial integrity (Russia invaded northern Georgia in 2008, resulting in the creation of two nominally independent enclaves between Georgia and the Russia Federation to the north: South Ossetia and Abkhazia) and supports its Euroatlantic integration, which is why he recommended to the EU that it work out a program for Georgia, the most important part of which would be the elimination of the visa requirement.  Orbán believes that over the past 15 years Georgia was one of the most “innovative” countries economically and politically.

Garibasvili said he was confident that more and more Hungarian companies will discover the opportunities offered by the Georgian market, and he had agreed with Orbán on regional energy questions, markets, transit possibilities and new areas of cooperation.

Georgia must make serious efforts to prove that it can be an acceptable partner to the EU, Garibasvili said. Joining the Euroatlantic alliance and achieving the right of its citizens to travel to the EU without a visa were matters of high priority for his country.  At a recent top-level NATO meeting the Georgian prime minister thanked Hungary for its help in enabling it to help Georgia fulfill its commitments to NATO.

Léderer believes there is only one reason Georgia might be important to Hungary and that is as a possible transit route for natural gas produced in nearby Azerbaijan.  For reasons of geography this can only be transported across Georgia.  Georgia is already transversed by two gas pipelines, both of which end in Turkey.

Georgia is the only country in the Caucusus that has normal relations with Hungary, according to Léderer.  The other country in the region that could be considered a democracy is Armenia, with which diplomatic relations effectively ended when Hungary agreed to repatriate the Azeri axe-murderer of an Armenia military official, who was granted a presidential pardon upon his return.

Léderer says Georgia is not only a democratic country but a Western-oriented one.  He says the dilettantism of Hungary’s foreign policy over the past few years has not endeared it to Georgia.

Léderer believes the 2008 Russian-Georgian war was a dress rehearsal for what is happening in eastern Ukraine, which is why he does not think Georgia approves of the “double-dealing” game Hungary’s foreign policy represents in this matter.

He said it is not possible to know why the meeting with the Georgian Prime Minister took place just before Russian President Vladimir Putin’s arrival in Budapest, although Georgia is interested in what Putin will say.   Both Orbán and Szijjártó have declared that the purpose of Putin’s visit is to negotiate a new long-term gas supply contract, which has implications for Georgia and the gas transported across it.

According to the foreign policy expert, the entire point of Hungary’s “eastern opening” is for Hungary to deepen its economic relations with the East, which have not significantly increased over the past few years, and in this respect Georgia is no exception.  Léderer believes there is enormous potential in tourism and that the Georgians very much like the Hungarians, considering Mihály Zichy to be one of their national painters, but that Tuesday’s meeting has to be handled independent of that.

Léderer says it is one thing to offer to help Georgia, and another how this fits in with Hungary’s “Russian politics.”