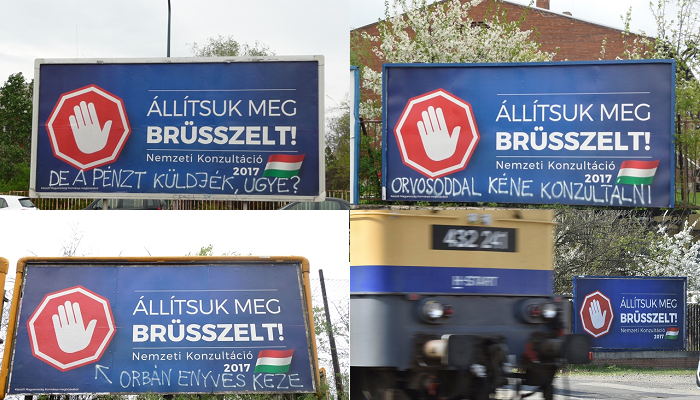 News site index.hu reported Tuesday morning that the “Let’s Stop Brussels!” national consultation posters, which had been placed by the thousands on billboards, signs and outdoor ad columns across Hungary, suddenly came down this week amid calls by the European Commission and Fidesz’s European Parliament group, the EPP, for Hungary to cease what the EC sees as an anti-European campaign.

The ads, meant to drum up support for the national consultation (which makes a number of contested claims about EU intervention in Hungary’s internal affairs), were removed unexpectedly in the middle of the consultation campaign: citizens have until May 20 to respond to the consultation by mail, or by filling out an (easily abused) online questionnaire.

Advertising experts told index.hu that the timing of the ads’ removal suggests a change in strategy on the part of the government’s communications office: such outdoor advertisements are typically changed on the 1st and 13th of every month. The removal of the ads at any other period of the month (especially in the quantities involved in the national consultation campaign) is unusual, according to the experts, and has led to speculation that the government may be stepping back on its anti-Brussels smear campaign in response to the EC’s demands.

However, undersecretary for the Prime Minister’s Office Csaba Dömötör told state news wire MTI that “based on the campaign’s schedule, the individual phases use the ad spaces with differing weight, and now the television, radio and print-media are more emphasized. There isn’t any circumstance which would have caused a change in the schedule.”