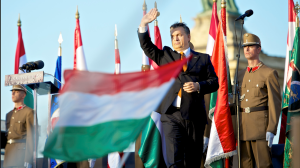 Propeller.hu reports that a formal complaint has been filed against Prime Minister Viktor Orban for allegedly delivering a hate speech as part of official ceremonies held on October 23rd commemorating the Hungarian revolution of 1956.   Excerpts of his speech can be read here.

According to the complaint filed by the Free Persons Liberal Party for Hungary (SZEMA) Orban broke the law by delivering a speech inciting the crowd to violence against a social group.  The prime minister declared in front of a large audience that “they are once again organizing, threatening, falsifying, and allying with foreigners.”

“Organize, volunteer, and join us! There’s no need for us to worry, but slowly and surely we need to start up our machine and ready our teams for battle, just as we did in 2010.  Get ready to finish now what we started in 1956!”

Propeller.hu reports that according to the complaint it is a crime to incite a crowd to war in a manner threatening to public calm and societal peace.  The law is directed at the facts of the situation and is not concerned with the speaker’s actual intentions.  It is sufficient for the offender to be aware that statements delivered before a crowd are capable of inciting the listeners to extremist behavior.  One who promulgates hatred against a social group commits a crime. According to the complaint those are guilty of disrupting societal peace and creating social tension who express hateful intent against a defined group of individuals.

By “they” Orban was referring to Communists and Communist sympathizers which, given the context of Orban’s speech, could be interpreted to mean all socialist and liberal politicians and their supporters.