A list of March 15 national holiday events in Budapest 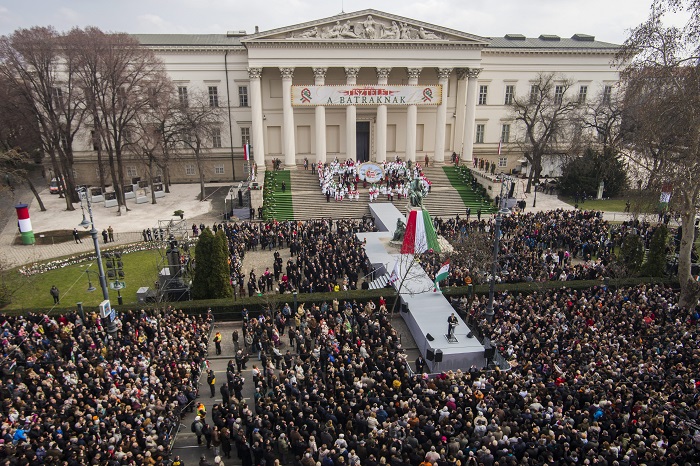 March 15 is always an eventful day in Hungary as the country celebrates the anniversary of its revolution against the Austrian Empire in 1848. If you’re visiting Budapest, or live here and would like to bear witness, there will be several events in the heart of the city that will give you an idea of the multiple interpretations of March 15 that mark every year’s celebration.

At 10:30am, the government will host a commemoration event on the steps of the National Museum. After the opening ceremony, Budapest Mayor István Tarlós will speak, followed by a speech from Prime Minister Viktor Orbán.

Three other events will take place concurrently in the area — all three opposition responses to Orbán’s speech.

At 10am, the organization Civil Association for a Democratic Hungary will meet on the corner of Múzeum Körút and Kecskeméti utca. Organization members Zoltán Büki, Tibor Horváth, and László Kiss are expected to address attendees. Also at 10am, and roughly at the same location, the Facebook group “I am ashamed that Viktor Orbán is my prime minister” will be holding a demonstration. Both events are scheduled to last until 1pm.

The most exciting event in the area will likely be the demonstration hosted by opposition party Együtt, which is scheduled for 10:30am. Együtt chairman Péter Juhász has announced that, despite a police order, he and fellow party members will be distributing whistles in the area for anyone who wishes to heckle Orbán during his celebratory speech.

(Note: The last time Juhász organized a whistle concert for Orbán during October 23 celebrations last year, elderly Fidesz supporters attacked those blowing whistles. There was at least one injury – when historian Krisztián Ungvári was punched in the face – but most of the hostility came in the form of shouting).

At 1:30pm, Jobbik will host a remembrance ceremony at March 15th Square, just around the corner from where Orbán will be speaking. Jobbik chairman Gábor Vona and other party officials are expected to speak at the event.

At 2:30pm, former opposition presidential nominee László Majtenyi will host a peaceful march from the Budapest Opera to Kossuth Square.

From 2-5pm, Momentum Movement will host a picnic at Budapest’s City Park (Városliget). There will reportedly be arts and crafts, events for children, history and literary lectures, food and drink, and dancing.