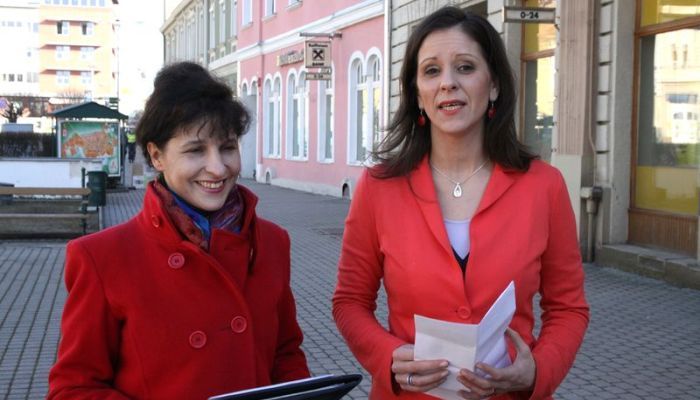 Politics Can Be Different (LMP) candidate Barbara Sallee (left) says that votes cast for her in the upcoming Ajka-Tapolca by-election are not “lost votes”.  She does not agree she has no chance of winning and will not step back in favor of the joint Hungarian Socialist Party-Democratic Coalition (MSZP-DK) candidate, not even to prevent a far-right Jobbik victory. What she didn’t say was whether she would join the LMP faction in parliament if elected.

Budapest Beacon: Is there any chance you will step back?

Barbara Sallee:   The short answer is “no”.   The long answer is that we’d like to offer voters a real opportunity to choose, especially those who are disillusioned with party squabbling and mud-slinging. We’re building local values. Voting for me is not a lost vote. A lost vote is one that elects a person to parliament who only represents party interests, not local interests and values.

BB:  You are obviously aware of having no real chances to win.

BS: I wouldn’t put it that way. I’m talking to voters disappointed with Fidesz for the last five years and who are fed up with corruption and favoritism.  I’m talking to MSZP voters desirous of genuine change in left-wing politics, and those who really want to get rid of that liar [DK leader Ferenc] Gyurcsány. And finally, I’m talking to Jobbik voters who don’t want radical extreme politics involving Russian investors. And of course I’m talking to those who want an economic development based on real local values. I can’t agree with you but I understand the calculations of the media.  Let constituents vote for real people and platforms.  Which candidate one votes for should not depend on surveys.

BB: I ask because Jobbik is at the gates. The new Arrow Cross party has a real chance of winning.

BS: There’s no need to demonstrate that Fidesz has failed.  People understand and see it.  Jobbik’s chances depend on the voters.  I lived in Switzerland for 25 years where there is a serious tradition of referendums. I know what democracy is. Don’t think in terms of opposition votes. I’m asking every constituent to vote according to their conscience.

BB.:  With regard to the Veszprém election in February, LMP said they wouldn’t step back in favor of civil candidate Zoltán Kész because he is a “free market fundamentalist”

BS: You didn’t say it out loud but do you mean I should step back for MSZP?

BB: I think it would be a wise decision on LMP’s part in order to prevent Jobbik from winning.

BS:  If MSZP voters picked me they would kill two birds with one stone. On the one hand, real left-side reform comes true, which their own party could not achieve since they’re still linked with Gyurcsány, Pad being the joint candidate of MSZP and DK.  In addition, in me they would elect a professional, a real civil, who would work for local issues. I’m expecting the votes of MSZP supporters, too.

BB: At the beginning of our conversation, you pointed out that you would not join the parliament as a party soldier. In case you won, you would obviously be a member of the LMP parliamentary faction. Would there not be a certain kind of party discipline, an insistence on adhering to the principles of LMP?

BS: I’m in a very lucky situation. LMP nominated me as a civil, being outside of the party, because they appreciate my professional work. This is fortunate because I appreciate LMP’s professional work, too. I support what LMP does in politics. We wouldn’t know about numerous issues – [nuclear plant expansion] Paks II for example – had it not been for LMP. I could really support the politics of LMP and they stand for my 18-points program. The collaboration of a civil and a party only works if they can be a partner to one another.

BB: Would you remain independent in the parliament or join the LMP faction?

BS: I support the politics of LMP, no matter what. Let it be an open question how it’s going to happen technically.