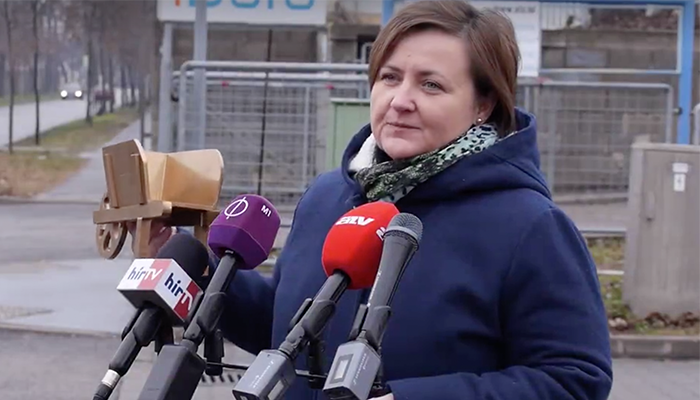 Felcsút mayor Lőrinc Mészáros is the winner of this year’s 2015 Gold Wheelbarrow award.  Politics Can Be Different (LMP) MP Szilvia Lengyel held an outdoor press conference on Monday to announce that the “rags to riches” construction mogul, whom many suspect of being Prime Minister Viktor Orbán’s strawman, had beaten out an impressive range of competitors, including other close friends and family members of Orbán.

“LMP founded the prize a few years ago and every year recognizes those who best avail themselves of the theft of public money and state property,” Lengyel said, calling Mészáros “the most industrious strawman today in Hungary”. She continued:

There has never been such stiff competition as over the course of last year.  And the panel of judges were never so hard pressed as there were many excellent and deserving candidates to choose from.  And the field of candidates was broadened by the fact that the traditional winner, Lájos Simicska, disqualified himself on that memorable Friday afternoon last February.  So we had to judge a rather wide field of competitors.  I might mention Andy Vajna, the Tiborcz family, István Garáncsi, but we musn’t forget about Zsolt Nyerges.  But let us remember as well Márta Tocsik and László Puch.

The corrupt machine created and operated by the government works perfectly.  Unfortunately, there is only one problem:  it consumes an unbelievable amount of money.  One most constantly fill it up with state assets and public funds.  But this time we sought out the best, and we found it in the person of Lőrinc Mészáros.  The jury was impressed by his series of extraordinary accomplishments in the privatization of public assets.  Not for a long time has there been such an unabashed theft of public assets, as he and his family acquired 1400 hectares of public land in the value of nearly HUF 2 billion.

In the person of the former gaspipe fitter, we find a real Renaissance Man, whose various interests have amassed HUF 37 billion to date through public procurement.  In addition to giving over this award, we wish to convey the outrage of the Hungarian taxpayers and our feeling that they are stealing the country over our heads.

Thank you Lőrinc Mészáros and thank you Viktor Orbán!