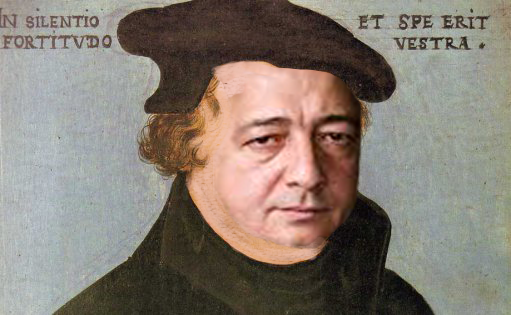 “Zoltán Balog has failed to support the ecumenical brotherhood of these churches.  He has failed to demonstrate the ability to separate political and theological issues.  And he has failed to be virtuous in suppressing ill-intent.” – Tamás Béres, Lutheran Theological Seminary professor

In an interview appearing in daily online Index.hu on Monday, Minister of Human Resources Zoltán Balog attempted to downplay Fidesz publicist Zsolt Bayer’s criticism of Pope Francis by comparing it to that of Martin Luther.

Earlier this year Bayer wrote that Pope Francis “is either a demented old man who is completely unfit to be Pope, or he is simply a scoundrel”.

So how did Balog defend Bayer? By using a classic Fidesz technique of deflection and finger-pointing.

“Zsolt Bayer is a Lutheran. Go ahead and read what Martin Luther wrote of the Pope. Compared [to Martin Luther’s] writing, [Bayer’s] statements are worded quite tamely,” Balog said.

Balog, who happens to be a Lutheran minister himself, drew serious criticism soon after his interview was published.

Index.hu spoke to a few Lutheran clergymen about Balog’s statements. Here’s how they responded:

According to Balicza, Catholics and Lutherans today engage in dialogue in a manner that reflects their mutual respect for each other. When theological issues are addressed, it is done in a manner that excludes extreme statements and remarks that would insult the other party.

Balicza pointed out that Luther’s criticism of the Catholic Church and Pope took place 500 years ago at the time of the Reformation and should be interpreted in that context.

Balicza thinks Balog’s remarks in the interview about Bayer being a Lutheran are completely irrelevant, and that Bayer’s opinion of the Pope in no way reflects the opinion of the Lutheran Church.

Tamás Béres, a professor at the Lutheran Theological Seminary, wrote in his blog that “Zoltán Balog’s statements succeeded in surpassing Bayer’s ill-intent.

“Zsolt Bayer’s stomach-turning tastelessness, the cynical manner in which he defends the government, and news of the high number of state awards returned by their awardees should not be hanged around Luther’s neck, not even with a remark that strikes like a blow under the belt,” Béres wrote.

He said Lutheran leaders in recent years have “criticisms or reservations about getting behind the government’s propaganda.”

According to Béres, Balog should have known better as a Lutheran and clergyman when he defended Bayer in this manner.

“Zoltán Balog has failed to support the ecumenical brotherhood of these churches.  He has failed to demonstrate the ability to separate political and theological issues.  And he has failed to be virtuous in suppressing ill-intent,” Béres wrote.

Our readers may recall that the Hungarian government recently awarded Zsolt Bayer with the once-prestigious Knight’s Cross of the Order of Merit of the Hungarian Republic for his exemplary service to the field of journalism, exposing important national matters, writing about Transylvanians, and for doing research on the gulags.

In reality, Bayer is much better known for his anti-semitic and anti-Roma remarks, use of foul language, and staunch defense of the Orbán government.

One of our favorite Bayer moments came in 2015 when at a demonstration he compared Viktor Orbán to Gandalf the Grey.

The government’s decision to award Bayer the Knight’s Cross in August prompted more than 100 earlier recipients to send back their awards or offer them up for auction for charity.