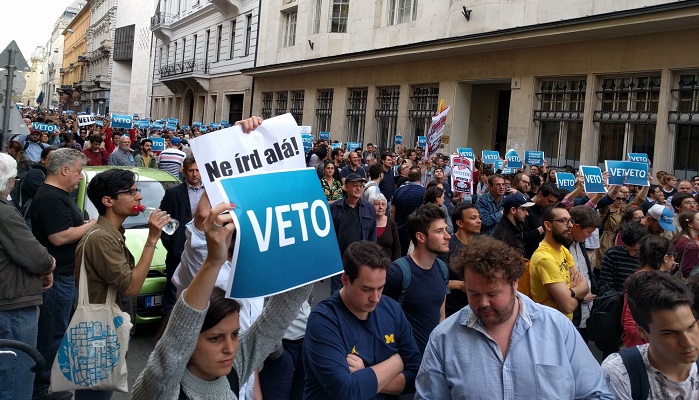 Hungarian President János Áder is expected to take action Monday on the law on higher education recently rushed through Parliament. Some 80,000 protesters took to the streets of Budapest Sunday in opposition to the law, which threatens the continued operation of Central European University (CEU) in Hungary, and many demonstrators demanded that Áder either veto the bill out of hand or forward it to the Constitutional Court for review. Many opponents of the legislation see President Áder as the last chance for its rejection, and some protesters were convinced that the size of Sunday’s crowds would be enough to convince him to rethink the matter.

Magyar Nemzet reports that Áder has held numerous meetings and discussions on the issue in recent days, including with CEU leadership, who asked him to veto the bill, known as Lex CEU. CEU had earlier requested an audience with Minister of Human Capacities Zoltán Balog, who first submitted the bill, but was denied. The meetings with Áder, the first such talks granted to the university’s leadership by a senior government official, led some to hope that he would be receptive to what has become a massive opposition to the bill in Hungary and abroad.

But according to sources close to the President, Áder’s legal advisers have found no problems with the bill, and he is expected to sign it into law late Monday.

Further protests are planned for Wednesday at Hősök tere (Heroes’ Square) against a proposed bill which would require all NGOs that receive more than HUF 7.2 million (USD 24,000) in foreign funding per year to register themselves with the government as “foreign-funded organizations.” The bill has been criticized as an attempt to stifle opposition voices and civil activity in Hungary, and has been compared to similar laws on the books in Russia and Israel.