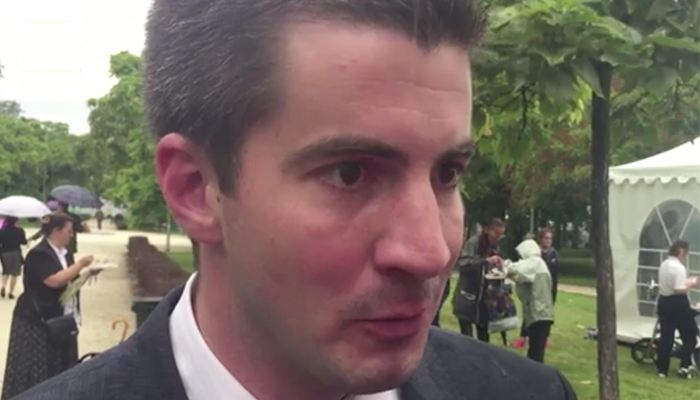 On Thursday, August 20th, Hungarians celebrated the 1015th anniversary of the founding of their country, culminating in a spectacular display of fireworks in Budapest and other locations throughout the country.

The tenor and content of Kocsis’ speech is noteworthy, if only because Kocsis is also the director of communications for Fidesz (although one is usually left with the impression that he is the one being scripted, and not the other way around-ed.)

Flanked by deputy mayors, Kocsis read aloud a prepared speech in which he portrayed “illegal immigrants” as the latest wave of invaders to attempt to destroy Hungary over the course of the country’s 1000-year history.

“These days Hungary and Europe are confronted with an entirely new challenge—a modern-day migration of people.  And once again Hungary is the frontier, and once again responsibility passes to this small but strong country to hold back the danger and to protect all of Europe, just as it has done so many times over the course of our history, as in the case of the Turks or the Tatars.”

Alluding to the teachings of king Saint Stephen, Kocsis reminded the audience of the importance of “responding to external threats” even as the country “endeavors for peace.”

“Already at the time of founding the country, they recognized the existential importance of distinguishing foreigners that pose a threat from those that come to enrich the culture of our country, and which accept our traditions, our laws, and our culture.”

Acknowledging the diversity of the Hungarian people, Kocsis warned that  “a country that does not protect itself, its culture and its traditions from foreigners will cease to exist”,  and for this reason Hungary expects foreigners “to safeguard our well-being, to not incite fear in those who live here, and to not violate the laws of our country”. He proclaimed that “We will not surrender ourselves just as our founder and his successors did not surrender.”

“Just as king Saint Stephen bestowed his legacy upon us, we want to preserve Hungary for the Hungarians, and Europe for the Europeans. We insist on our thousand-year-old culture, our traditions, our beliefs, on our fragile security and in our well-being.   This is what the legacy of Saint Stephen means to me.  We will never turn our backs!”

The official video of Kocsis’ speech shows a crowd of predominantly white, middle-aged Hungarians listening politely, if disinterestedly, while taking shelter from the rain under individual umbrellas or a large tent.

Conspicuously lacking from the video are faces Hungarians would identify as being “Gypsy”, even though some 80,000 Roma reside in Budapest’s District 8, making it the largest Roma settlement in all of Europe.

Also absent from the video are protestors from the “No compromise party” physically prevented from entering the square by a phalanx of muscle-bound, black-clad individuals passing themselves off as event organizers despite the actual event organizer telling them they could attend on condition they respect the law.

At one point, a member of Kocsis’ unofficial security detail struck one of the protestors, an older women, in the face.  The assailant was subsequently identified as Nándor Jonas, a local contractor whose company, Jon Bau Kft., has reportedly received a lot of demolition work from the district since 2010.

Conscious of the fact that he was being filmed, Mayor Kocsis told the event organizer that while he vaguely recognized the assailant, “it doesn’t matter who the culprit was, the police will handle the matter, right?” (as though 8th district police would dare arrest someone physically assaulting a non-Fidesz supporter attempting to disrupt an official ceremony-ed).

While Kocsis may have struggled to recall the name of the assailant, investigative journalism newsportal atlatszo.hu points out that he certainly recognized among the toughs Fidesz district city assemblyman József Kaiser who leads the district civil guard.

Perhaps out of a sense of contrition, Kocsis invited the leader of the protestors, Gábor “Tuareg” Szabó, to say a few words from the rostrum, much to the visual astonishment of his informal security detail.

After thanking Kocsis for the opportunity to speak, Szabó said that

“We would be grateful if you would invite those, the vast majority of which are District 8 residents, who are being prevented by the Fradi security guards you ordered here from entering the area of the official and open ceremony.  Are you willing to do that?” (Fradi being a reference to the city’s Ferencvaros football club) 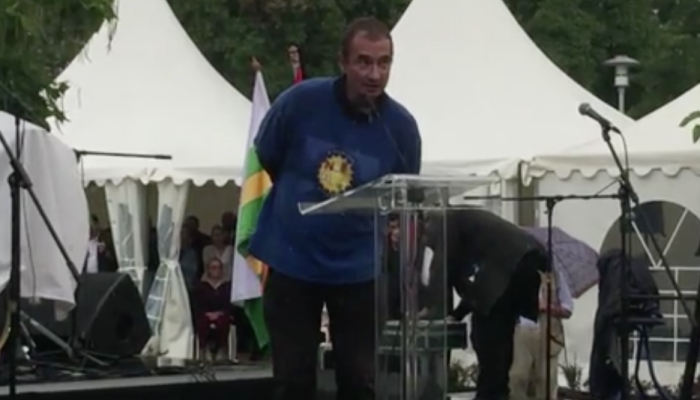 When asked whether it was normal for twenty “huge, bouncer-sized people” to verbally and physically assault people at official ceremonies, Kocsis denied having invited them.

Index.hu reports that, in fact, it was District 8 public property oversight office head Ferenc Bajusz who invited them.  Despite acknowledging this, in an official statement issued later Bajusz denied having done so and threatened index.hu for reporting what an index.hu film crew had captured him saying at the official ceremony.