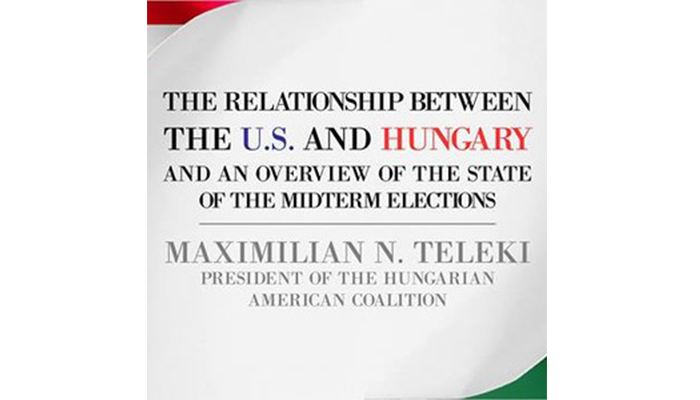 Hungarian American Coalition president Max Teleki gave a speech on relations between the United States and Hungary last night at Corvinus University. Teleki’s lecture, which included a brief overview of the U.S. midterm election results, is part of a series of seminars organized by Antall József Knowledge Centre.

The Hungarian American Coalition is the largest recipient to date of grants issued by the Hungary Initiatives Foundation, the government-owned and funded foundation run by former minister of national economy Tamas Fellegi in Washington, D.C.   Fellegi is also the CEO of EuroAtlantic Solutions, a Budapest and Washington, D.C.-based international communications and consulting company.

Teleki told the audience that while Hungary has made some “unforced errors”, the United States “has not really had a strategy for Central East Europe over the last six years – at least not a strategy that’s cohesive”, adding that U.S. government relations with Hungary have been characterized of late by “reactive measures”.

As a young democracy 6-7 years ago, Teleki says, Hungary could have really benefitted from more “direct institutional assistance to strengthen parts of its democratic structure”, which includes a “strong civil society, strong judiciary, a good deal of transparency and great deal of openness from the media.”

Teleki believes that the failure of US companies to undertake investments after 2007-2008 were detrimental to Hungary.

He said that after the 2010 elections handed the Fidesz-KDNP alliance a two-thirds parliamentary majority, the United States’ criticisms of Hungary’s government targeted “all the dramatic changes going on, the speed [of the changes]”. He believes there was a lack of understanding regarding why such changes were happening, and thinks the government of Hungary had a “very poor practice of communicating what was going on to both the domestic Hungarian audience as well as the international audience.  In fact, there was really no communication strategy.”

According to Teleki, the Hungarian government’s poor communication resulted in a “vacuum within the news media-driven political sphere” making it “very easy to be critical”.  Also hampering the government’s efforts in his opinion were  “poor and impulsive decisions . . . having a broader implication on the short-, medium- and long-term health and future of Hungary, and to some degree its neighbors”.

“I briefly started off by describing the lack of investment, the lack of focus by the United States on Central Eastern Europe, and I certainly think that’s the case,” Teleki said. “I think that most people who have spent a lot of time investing in both political capital and business would say that there has not been the kind of support structures that are needed.”

On the US travel bans, Teleki said they were completely misunderstood by the Hungarian public, asserting that US travel bans are in effect in twelve European countries, including four Central European ones.  “Now, this isn’t confirmed because it’s all confidential,” he volunteered, “but it’s pretty much what’s understood by many.”

What Teleki neglected to mention was whether the other alleged travel bans targeted high-level government officials as in the case of Hungary’s Tax Authority chief Ildikó Vida. Because the U.S. Department of State is prohibited by law from publicly releasing the names of those suspected of corruption temporarily suspended from traveling to the US, it remains to be seen whether Teleki’s assertion isn’t just hearsay. In the case of Hungary, Vida herself admitted to being placed under the visa ban, as did one of her deputies.

According to Teleki, the Hungarian government is “well aware of the possibility of certain people being on the list” and is in possession of the evidence related to the visa bans. He called the Prime Minister’s Office actions in this regard “theatrics”.

By way of summation, Teleki said:

“There’s plenty of hypocrisy in much of the U.S. policy, but that doesn’t necessarily mean that a mature democracy that’s clearly imperfect, but that’s had success and clearly has an important role in the world, shouldn’t try to influence its allies in expressing concerns. The question is how are these concerns expressed.  I think that’s where a lot of the frustration can lie within the Hungarian public, and makes it a little dangerous in my opinion. It makes the U.S. like a bully sometimes. Maybe they’re expressing an opinion in a way that’s not very empathetic to the political and economic environment here. And also I think it’s important because the U.S. often doesn’t listen as much as it should, and that’s just a by-product I think of being the country that it is and the way that they’ve operated. It’s not necessarily a Republican or Democratic way of governing.  It’s a cultural way of interacting.  It’s the politics of diplomacy. It’s a carrot, it’s a stick. I’m very optimistic about Hungary’s future. I’m very optimistic about the 21st century and about the U.S. role in the world.”