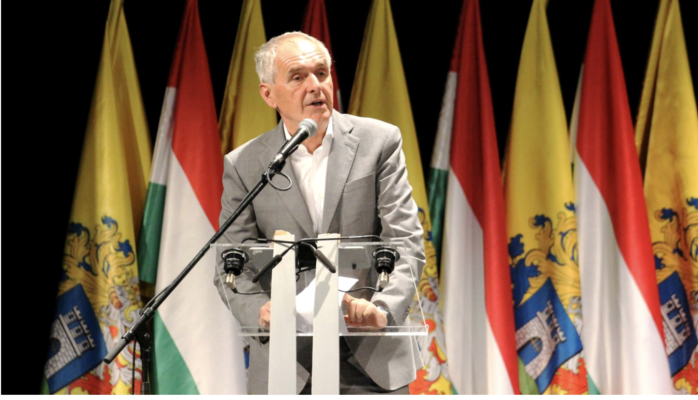 Children of Roma families living in Kaposvár’s Roma neighborhood attend the nearby Pécsi Street Elementary School. The school is attended solely by Roma and – just like similar segregated institutions all over the country – provides a poor education. According to the online edition of the liberal print weekly, children graduating from the school can barely read, write or do math, and most of them even drop out from low-quality vocational schools afterward. Although Kaposvár has numerous elementary schools where Roma children could go, the municipal council – led by mayor Szita since 1994 – did nothing to prevent the segregation of Roma children.  The magazine writes that in this Szita was emboldened by a 2010 ruling by Hungary’s highest court, the Curia, finding that it was not the City Council but the parents themselves who were responsible for sending their minority children to the same school – Pécsi Street Elementary.

The situation did not change at all after the re-nationalization of council schools in 2013 as the school continued to start all-Roma classes every year. Chance For Children Foundation (CFCF), a now-defunct Roma equal opportunity advocacy NGO, filed a new lawsuit against the municipal council, the county government office, and the state office responsible for maintaining schools, in order to close the segregating school. CFCF eventually won the lawsuit in the autumn of 2016 with the court issuing a ruling prohibiting the Pécsi Street Elementary from starting new classes from the 2017 school year onward.

However, Mayor Szita sidestepped the court ruling by leasing the buildings and grounds of the Pécsi Street Elementary school to the local Mikrokozmosz foundation to operate a a private school. The council swiftly granted all permissions and even approved Szita’s recommendation that it contribute HUF 8 million to the foundation to help defray costs. The sole representative t0 vote against the proposal was the one Democratic Coalition (DK) council member,  the Socialist (MSZP) council member voting in favor of the proposal along with their Fidesz counterparts.

168 Óra contacted the Ministry of Human Resources to ask whether the ministry planned to take action. “We confirm that based on our earlier answers, there will be no first year class in the […] Pécsi Street Elementary. Mikrokozmosz Foundation does not have a valid rental contract [required] to continue the elementary school education, namely the previously made contract had been terminated with a mutual agreement, based on this, according to our information, the modification of the maintainer’s documents is under way,” reads the ministry’s answer. The ministry vowed that it is “also determined to enforce the court’s final ruling”.

However, 168 Óra writes that Szita could still pull off his Mikrokozmosz Foundation plans to continue segregated elementary education at the downtown campus of the Kaposvár University.