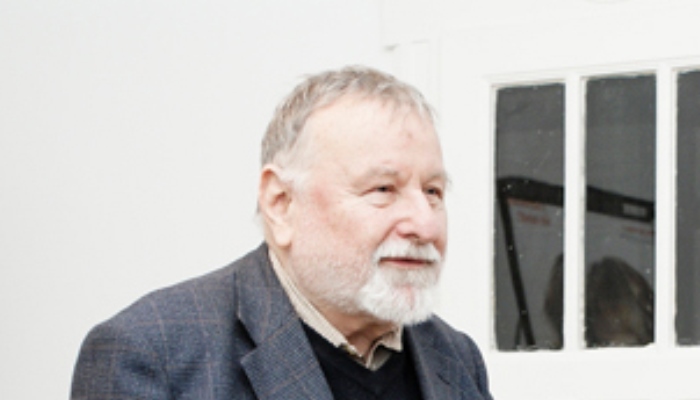 Gyula Tellér is considered by some to be the most influential thinker in Hungary PM Viktor Orbán’s inner circle.

Hungary Prime Minister Viktor Orbán’s recent denunciation of liberal democracy represented yet another ideological about-turn for the one-time liberal politician. On the road to his “end of Europe” worldview, Orbán has done a volte-face on many issues, including Russia, the EU and foreign-funded NGOs.

Many intellectuals who once held high hopes for Orbán abandoned them long before Hungary’s premier endorsed “illiberal democracy” in a speech to the Fidesz party faithful in Romania last weekend. However, there is one ideologue who has been with Orbán every step of the way for two decades, shaping his worldview and earning HUF 600,000 (around USD 2,500) a month for “reading and presenting foreign literature” in the process.

A writer and former member of the liberal, regime-changing SZDSZ party, Gyula Tellér has been calling for an “alternative to the Hungarian liberal state” since 2006.  When Fidesz regained power in a landslide victory in 2010 he became an advisor to the prime minister.

Tellér’s two-volume account of the regime change and the 1990s political and economic life of Hungary can be seen as a primary inspiration for the concept of the “workfare state” as outlined by Orbán last Saturday.

Compare this extract of Orbán’s speech:

“[Before 2010] we constantly felt that the weaker were being stepped upon. It was not some kind of abstract principle of fairness that decided conflicts, originating from a recognition of mutual freedoms, but the stronger party was always right: the stronger neighbor told you where your car entrance was. It was always the stronger party, the bank, that dictated how much interest you paid on your mortgage, changing it as they liked, as it went along.

to this from a speech Tellér made at a conference commemorating the 1989 change of regime:

“A huge group of social misfits had come into being by the mid-1990s, who became completely excluded from economic integration. […] All this created a group in society consisting of 50-60% of the people, who had been disappointed by the change of regime, unable to help themselves. They offer little or no contribution to the economy, are in need of benefits, feel nostalgia for socialism triggered by their plight, are extremely sensitive to economic promises from the political elite, and are exposed to all of the manipulation, misdirection and incitement that is exercised by ‘democratic’ political forces. They are the losers of the transition. And they also hold the majority of votes in the constitutional democracy!”

“Competing political groups realized early on, that the weakening of the Republic of Hungary results in a constant loss of sovereignty. The reason for this is not exclusively the dependence on domestic votes, but also the growing influence of foreign powers and international organizations (USA, Russia, Israel, the EU or organizations by the symbolic investor, such as the World Bank the IMF, the WTO, and so on).”

From reform-Socialism to liberalism and to the far-right

All the quotes accompanying Orbán’s recent speech originate from opening remarks from a lecture Tellér made at a conference for the 20th anniversary of Hungary’s 1989 change of regime.

An analysis of Tellér’s CV shows that the frequent shifts in his political leanings have more or less coincided with those of the Fidesz leader. Born in 1934, Tellér’s first ambitions were literary in nature. Many consider his translations into Hungarian of Edgar Allan Poe, Milton, French poets Stéphane Mallarmé and Arthur Rimbaud to be the best of their age. His early close relationship with such literary giants as Sándor Weöres has earned him accolades from the highest echelons of the country’s intelligentsia.

In the mid 1970s Tellér became a leading social scientist with links to Hungary’s political dissidents. From this circle, Tellér’s drift towards liberal dissent made him join the Network of Free Initiatives (the organizational predecessor of liberal SZDSZ) in 1988. After the transition he became an MP, and was said to represent the party’s “radical anti-communist” wing. According to Tellér, liberals had two possible paths: either reconcile with the Kádár elite and establish a laissez faire economy, or establish a “new elite” that excludes all post-communist elements. When the SZDSZ chose the former road, allying to the Socialist Party in 1994, he left the party.

With their shared anti-communism, Tellér and Orbán were natural allies. Tellér first presented Fidesz as a force for system change in a manifesto calling for a “Civic Hungary” in 1996. His ideas were the foundation of Orbán’s election strategy, and after 1998, of his ideas as prime minister. Unlike many others from Fidesz’s civic conservative phase, Tellér did not leave the party after its populist turn in the 2000s. In fact his ever-evolving ideas influenced Hungary’s premier.

Tellér was responsible for elaborating the concept of “polgári Magyarország” (Hungary of the bourgeoisie) as the “positive force” in Hungary’s modern history. However, when Fidesz suffered a narrow, shattering election defeat in 2002, Tellér began a slow but steady drift towards conspiracy theories and far-right ideology. And such was his standing within the party that his increasingly extremist worldview did not result in exclusion from its mainstream but began to exert an ever larger influence on Orbán.

A new rhetoric warning of a foreign conspiracy to take over Hungary by a liberal elite and “foreign agents” was ushered in alongside the “death of liberalism” and the desire to garner the votes of Tellér’s “losers of the transition”. After the 2010 election victory he continued to offer his “ideological consultancy” to the prime minister, whose latest speech was based on ideas propounded by Tellér five years earlier, as has so often been the case. Tellér remains the most influential thinker in the PM’s inner circle.