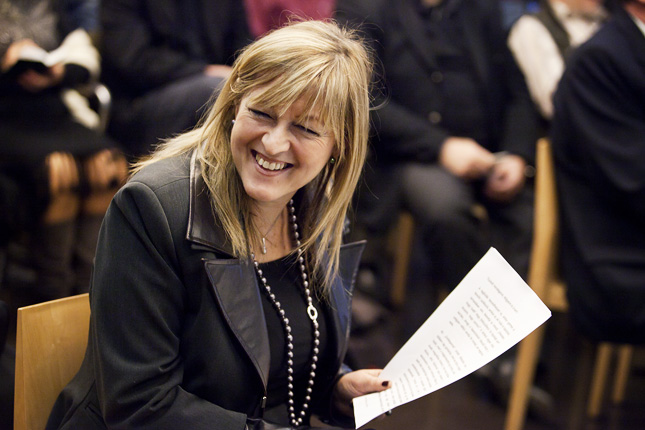 Five-times appointed chief director, many times a curator, university professor, billionaire, official historian to the System of National Cooperation. Mária Schmidt’s foundation and its projects were being funded with two billion forints in government subsidies, twice the previous year’s amount. This year however, securing funds has just got more difficult for her.

This was the first time Mária face a situation where she could not get a billion forints out of the blue, and where the Prime Minister’s Office will only support House of Fates project if they are fully aware of what the exhibition is going to look like.

This is how one of our government source explained the reasons behind recent tensions between János Lázár (Minister of the Prime Minister’s Office -ed.) and Mária Schmidt. Even though previously the two had an excellent relationship, with Schmidt successfully selling Lázár “clones” of the House of Terror (with the opening of the Memory Spot and the local Holocaust Museum in 2006–both were designed by her, with construction designs were made by her recurrent contractor Attila F. Kovács).

According to our sources, the reason Schmidt became an outcast is because she convinced Viktor Orbán the Nazi invasion of 1944 Hungary lost its sovereignty and freedom to act on its own, and this was only recovered with the change of regime in 1989. The emphasis on such an interpretation was criticized by liberal-leftist scholars for inventing excuses for the Hungarian political elite, as well as for the entire society, for their behavior during the Holocaust. The Memorial for the Nazi Occupation of Szabadság square was consequently a manifestation of that theory as well as the brainchild of Scmidt and Imre Kerényi, an advisor to Orbán. One government member told Magyar Narancs the monument was a “terrible kitsch”, and said it caused a major scandal, even though the Orbán government eventually completely embraced it as an idea. However, later on the prime minister realized that he was betting on the wrong horse. Other sources told us that the government does not yet want to take the House of Fates project from Schmidt as “they believe she is the only one who can realize it.”  However, they will not longer accept a concept that does not have the full approval of the majority of the Jewish community. Mária Schmidt no longer has the luxury of arguing with the government as not only theHouse of Fates but the House of Terror and her whole empire of research institutions (Institutes for the Research of the 20th and 21st centuries) operates using public funds.

She does not have to be really afraid, however. The party and business connections of the “hereditary” director of House of Terror and her late husband, András Ungár, are excellent, able to defend her position and budget under all previous governments. Ungár, who died in 2006 at the age of 52, left five billion forints to his wife. He received an obituary from his friend, Zsolt Bayer, in Magyar Nemzet. Earlier, in 2005, Ungár let Fidesz use his office premises at Madách tér for free, and this is where they furnished an office for the first “National Consultation.” Gusztáv Zoltai (former CEO of the Federation of Hungarian Jewish Communities) got really offended when Schmidt accused him of being member of the Communist Party Worker’s Militia (Munkásőrség), especially because he was serving there together with Schmidt’s father-in-law, Lajos Ungár, in the paramiliaty organization that distinguished itself by crushing dissent immediately after the 1956 Uprising in Hungary. András Ungár, who received his degree in Sociology, started his career as an assistant to financial broker József Lupis (who was convicted for embezzlement, fraud and forgery in 1998, but got out of prison in 2003 with a reduced sentence). Most of his wealth came from the purchase of Budapest Real Estate Management and Development (BIF) in 1997. The two major shareholders in this company were Kristóf Nobilis and András Ungár. It produced a gross income of 369 million forints in 2013, and Kristóf Nobilis, Zoltán Spéder (owners of CEMP, publisher of online news site Index.hu – ed.) as well as Schmidt’s daughter, Anna Ungár, are all sitting in its Board of Directors. The Schmidt family has a 24.62% share in the company Pio 21 LLC (jointly owned by Mária Schmidt, her daughter, and her son, Péter Ungár) that they inherited from András Ungár. The portfolio of BIF includes the Pasa Park luxury apartments, where both minister Mihály Varga and Fidesz parliamentary caucus leader Antal Rogán own multiple properties. Between 2006 and 2011, Anna Ungár also held shares in Prestige Media, managed by Attila Várhegyi, and owned by Ungár and his wife, Marianna Fekete. Prestige Media had a lot of contracts with local councils, including Hódmezővásárhely, preparing a “city marketing” package for them for HUF 96 million in 2010 (János Lázár was mayor of Hódmezővásárhely at the time – ed.).

Mária Schmidt, on the other hand, was also shareholder in now defunct Magyar Egyetemi LLC, owned by Szilárd Kövér (brother to parliamentary speaker László Kövér) together with Várhegyi’s wife. Another company being deleted from the company register in February this year, East XXI. Publishing and Printing, involved the whole Schmidt family, as well as Várhegyi’s wife, as owners. Private and public interests often overlapped, as Marianna Fekete is also a director of finances at the House of Terror. But Schmidt had her supporters, on the left as well.  Following Viktor Orbán’s 2006 election defeat, Schmidt was working on removing Orbán as a party leader and at the time, Gordon Bajnai was also often mentioned as belonging to the circle of Schmidt and her billionaire business partners.

The very foundation of Schmidt’s empire was the Public Foundation for the Research of Central and Eastern Europe (KTTK) founded in 1999. The first budget act of the first Orbán government defunded the Institute of Political History by HUF 50 million and the Institute for the Research of 1956 with with 67 million, while at the same time allocating HUF 117 million to the newly founded KTTK.  At the time it was only operating the 20th Century Institute but had as its primary objective the construction of the House of Terror. The state bought the building in 60 Andrássy út for HUF 800 million for the foundation, and spent a further HUF 2.7 billion renovating and furnishing it (By comparison, the renovation of the Sándor Palace, the current official residence of the President of Hungary, only cost HUF 2.2 billion at the time). As headquarters the foundation also received a property in Buda’s Határőr street. In 2002 they merged with a Debrecen foundation so that the established institutional framework could not be touched without consulting the Fidesz-stronghold of Debrecen in eastern Hungary.

Such fears proved to be unfounded. Although while in opposition Socialists and Free Democrats heavily criticized the House of Terror, once in government they limited themselves to contemplating changing the name of the museum, or “supplementing” its exhibition.  Eventually all that happened was they reduced the annual allocation to the museum by HUF 150 million in 2003, on initiative of Free Democrat MP Iván Pető, from the previous HUF 330 million guaranteed for three years (!) by Zoltán Rockenbauer, the minister of culture during the first Orbán government. Receiving only HUF 180 million forint annually, was was still better financed than the average cultural institution, supplementing its income with alternative sources, while not conducting any professional museological or academic work until today. (Only the Traffic History Museum, whose exhibits were in need of costly renovation, and the Museum of Ethnography received an annual 230 million forints at the time). But Mária Schmidt did not remain silent and even threatened to close the museum. Socialist prime minister Péter Medgyessy, who liked to present himself as a person bridging the two sides, was so terrified at this prospect that he immediately gave House of Terror an extra 100 million forints, increasing its subsidies to as much as 297 million forints, legitimating the whole project with a sudden, official visit. During their eight years in government, the Socialists never intervened with the board of the public foundation, accepting it as official Fidesz turf.

Even though by then her museum complex practically was a state within a state, Schmidt was still not content. In 2007 she penned an open letter to cultural minister István Hiller asking him to “use his influence so that the 20th Century Institute, the 21st Century Institute founded in 2000, would receive the same amount of support as the Institute of Political History or the 1956 Institute.” Hiller invited the directors of these institutions for tea, requesting them to submit their research plans for the next year, and promising to provide them their increased budget for this period of time.  He considered it a healthy measure that such institutions, serving as the intellectual background for different parties, would not have their funding modified depending on which party forms a government.  A little later the whole plan was swept away by the economic crisis.  Yet the House of Terror still received HUF 1.2 billion worth of EU funding in 2008. The person responsible for distributing EU funds in 2008 was Gordon Bajnai, who, already as a prime minister, announced the launch of this project at a joint press conference with Schmidt. The program, called Memory Spots provided part of its funding to schools to acquire technical equipment for a sum of HUF 549 million, and the rest was provided to KTTK. Students prepared 3200 oral history interviews within the framework of the project.  This mostly meant unsupervised interviews by unexperienced students with little or no educational or historical value. At least this is what one can conclude from visiting the project web-page operational since 2001. Here one can access only some of the recordings, with no recent activity. (The interviews have never been transcribed and you can search only a few keywords.)  However, there was still enough money for the House of Terror to acquire equipment and to establish an academic board chaired by Mária Schmidt for an extra monthly salary of HUF 300 thousand. The budget provided the museum with additional projects as well.  In 2006 the “Memory Wall” exhibit received 24 million forints, and in 2009, an “Iron Curtain Memorial” was supported with 19 million forints of public money.