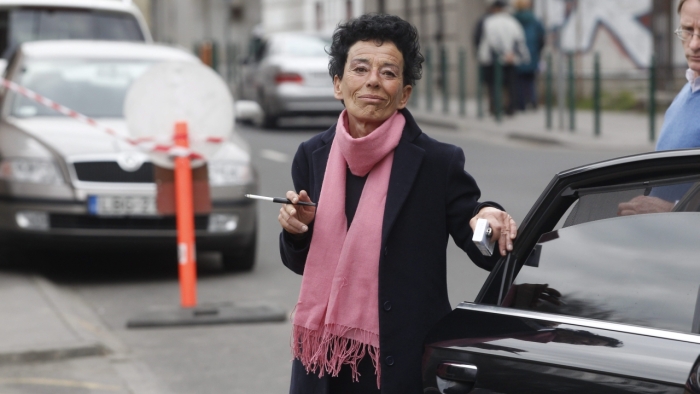 “We need to come to the realization that the welfare state is unsustainable, but regardless, dealing with poverty isn’t the responsibility of the state. Welfare programs did not exist in Europe prior to the Second World War, but people still took care of those who were unable to care for themselves. I structured the foundation’s commercial model to be an example for others and to serve as proof that we can solve problems without having to pay the salaries of employees and without having to pay expenses.”  – Zsuzsa Hegedus, president, “Every Child Be Well-Fed Foundation”, and paid adviser to Prime Minister Viktor Orbán

“Say what?”  – Richard Field, president, American House Foundation, upon reading the above quote

Who is Zsuzsa Hegedus?

“I love what I do. In 2009 I read a report about children who can’t even eat lunch. I researched what the situation is in [Hungary’s] most impoverished communities. What I uncovered was that there are many hundreds of thousands of disenfranchised children whose diet doesn’t provide them the nutrients they need for healthy development. The next day I started the “Every Child Be Well-Fed!” movement simply because I was so outraged. Our research on poverty conducted in the early 1970s didn’t yield any results showing hungry children. It was incredibly simple for me to decide what I would start: If not now, then when? If not me, then who?”

Hegedus’ organization was officially registered as a foundation on 21 January 2010.  During the first year its activities were limited to distributing food packages.  From the second year it also distributed vegetable seeds or animals.

Hegedus was appointed as Prime Minister Viktor Orbán’s senior advisor on social inclusion and social conflicts in July 2010, a position that comes with a monthly salary of HUF 1 million (USD 4,000), or roughly ten times the minimum wage the poor people she helps would receive if there were any jobs.

In 2010, the foundation’s goal was to help provide support to impoverished families living in 47 of Hungary’s poorest settlements by 2012, then to expand to include  disenfranchised children living in urban areas.

Magyar Narancs notes that the foundation has no employees, no infrastructure, no office.  It doesn’t have phone bills and it doesn’t even rent a car. Until June 2010 the foundation’s operating support was provided by a company called Commitment Zrt. “When I was appointed as Prime Minister Viktor Orbán’s senior adviser, a large portion of Commitment Zrt.’s support was no longer needed,” Hegedus told Magyar Narancs in 2011.

The foundation doesn’t even have its own bookkeeper, which may explain why it failed to submit financial information and proof of public benefit performance to Hungarian officials.

This does not prevent Hegedus from boasting that the foundation receives no direct support from the government and neither pays salaries nor remunerates expenses. She says her foundation operates entirely on donations.

“We need to come to the realization that the welfare state is unsustainable, but regardless, dealing with poverty isn’t the responsibility of the state. Welfare programs did not exist in Europe prior to the Second World War, but people still took care of those who were unable to care for themselves. I structured the foundation’s commercial model to be an example for others and to serve as proof that we can solve problems without having to pay the salaries of employees and without having to pay expenses,” summarized Hegedus.

The problem with her model, however, is when no one is accountable for carrying out administrative tasks, operation tasks, fundraising, logistics and training, (or if one person for doing it all) it becomes impossible to manage it all separately and they become blurred or, even worse, are not completed. Those responsible for completing the tasks become overwhelmed, which might explain why the foundation hasn’t prepared a single representative sociological impact study of its activities in the four and a half years it has operated. The closest thing to such a study are the questionnaires Hegedus herself writes and sends to the mayors of the settlements where her foundation operates every two years. The mayors are responsible for carrying out the research. Magyar Narancs tried to obtain copies of the questionnaires but Hegedus refused on the grounds that she doesn’t want unauthorized people to get their hands on the “know-how”. Similarly, she refused to summarize the results of her foundation’s activities and experiences.

So who is donating money to Hegedus’ foundation?

Hegedus would have you believe that her foundation operates exclusively on private donations.  However, such claims overlook the fact that many of the donors are state-owned companies and their employees.

The foundation’s funding comes primarily in the form of private donations (including 1 percent income tax donations) and corporate donations. An annual breakdown of these donations appearing in the Magyar Narancs article shows that corporate donations and private donations between 2010 and 2013 amounted to HUF 212.3 million and HUF 231.9 million, respectively.  Magyar Narancs reports that Hegedus’ foundation solicits donations not only from Hungary’s state-owned corporations but from the employees of these state enterprises as well. For example, last year state company employees were asked to support the foundation with a monthly contribution of HUF 200 (USD 0.85) over a period of 3, 6, 9 or 12 months.

In this way, Hegedus’ foundation has solicited some HUF 608 million in private and corporate donations to date, of which, according to its financial statements, it has spent HUF 571.5 million. Continue reading to see what they spent it on.

According to Hegedus, the chickens (oiloak) and ducks (ahateak) it distributes are purchased in the Basque region of Spain. Magyar Narancs writes that a businessman, referred to as Istvan B., from Abadszaloki, Hungary, arranged for the procurement of the animals.  Reportedly, his wife, Eva K., purchases the animals, becoming sole proprietor. Therefore, it’s impossible to see any financial statements regarding her business, only the Hungarian Tax Authority has insight.

Magyar Narancs asked Hegedus why the animals have to be procured from so far away. Hegedus responded by saying that the foundation researched all the possible suppliers but none were willing to provide 524,000 chickens. Hegedus responded to the same question in 2011 that, “The chickens and ducks came from Spain, and they will continue to come from Spain. Despite our best efforts to obtain the animals from Hungarian suppliers, the maximum amount of chickens they would have been able to supply us with was only 1000 per month – we were distributing 550,000 in two months.”

“[My] most important criteria when procuring both seeds and animals was that they be organic, because that way there wouldn’t be additional expenses for the needy families who were to receive them. The seeds wouldn’t have to be fertilized and the chickens wouldn’t have to be given feed, they could simply peck at the ground,” said Hegedus.

Magyar Narancs tried to run these numbers against the expenses listed in the foundation’s financial statements but was unable to reconcile the data.

In 2011 Kardoskuti Zrt. supplied pigs to the foundation at a cost of HUF 15,000 apiece.  In 2012 the foundation switched to a new supplier, a commercial enterprise which utilizes the work of prison inmates. Magyar Narancs writes that there is a long history of putting prison inmates to work in Hungary’s agricultural sector. The new supplier, Pálhalmai Agrospeciál Mezőgazdasági Termelő Értékesítő és Szolgáltató Kft., provided the pigs for HUF 14,000 apiece together with feed. Hegedus told Magyar Narancs that Minister of the Interior Sandor Pinter helped arrange the new supplier.  Earlier the two had worked out the details regarding Hungary’s public employment scheme.

Magyar Narancs reports that it became clear the pig donations were not working as well as Hegedus had hoped.  While many of the beneficiaries reported that their pigs had died soon after being delivered, other beneficiaries sold the pigs. However, because no impact study has ever been performed by the foundation, it is impossible to know exactly how the donations helped the beneficiaries.

Hegedus cites the fact that fewer and fewer families want to receive seed or animals from her foundation as proof that it has fulfilled its mission and that rural poverty is decreasing. In fact, it has been so successful that Hegedus thinks her foundation will no longer need to operate in a couple of years.