Miklos Haraszti on Hungary’s media and its “elected autocracy” 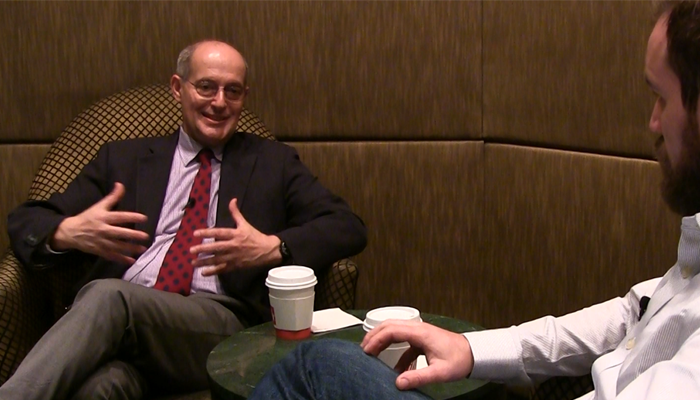 When the pot runs out of goulash, then the goulash autocracy will also end, just as it did in the case of goulash communism.

Media freedom and human rights expert Miklos Haraszti speaks with the Budapest Beacon about the media situation in Hungary.

According to Haraszti the effects of Hungary’s 2011 Media Law are “worse than expected”. He says the fact that the law gives the Media Council the right to arbitrarily punish media and to issue and revoke licenses intimidates media owners into practising self-censorship.  He also points out that the government has the ability to direct state advertising to government-friendly media outlets and influence whether advertisers advertise in independent media or not.

According to Haraszti, oligarchs with close ties to Fidesz have been buying up Hungary’s media outlets.

A non-European dualistic type of Eastern system has evolved. In the West there is public media and private media. Internally, public media is pluralistic and the private is externally pluralistic, meaning anyone can start any kind of media. By contrast, what I’ve noticed in the East is that dual system has evolved in which regardless of media ownership, be it state-owned or privately owned, it’s either “pushing the government’s carriage” or criticizing the country’s opposition movements, or it avoids politics altogether. The latter is also helping promote government interests. This is the kind of media environment that has evolved in Hungary in radio, television and print.

Haraszti believes Hungary has joined the ranks of “illiberal democracies” in which the appearance of free elections is maintained despite systematically changing everything needed for truly free and fair elections.  He says Hungary’s government seeks total control over broadcast media but continues to tolerate some independent media for appearance’s sake.

Haraszti cites other “Eastern tricks” such as politically motivated criminal prosecution of journalists and government pressure on civil organizations, primarily those engaged in investigative journalism, as in the case of Átlátszo.hu.

Since the elections there has been a new wave of repression. RTL Klub has been targeted by the government’s “advertising tax” which is the first of its kind in the world. This advertising tax doesn’t target profits, which is what remains of the revenue after expenses. but the pre-profit advertising revenues.  Essentially, the purpose of the tax is to strangle any potential profit. It even decreases the total tax revenues. The only purpose to a tax like this is to completely kill any media outlet that dares to be independent.

Haraszti says the government does this also because the media outlet is foreign-owned.

Haraszti calls “a historical first” the decision of independent, German-owned television broadcaster RTL Klub to “fight back” by running stories critical of the government and government officials.

These political stories are being watched by twenty percent of the population. That reaches more viewers than ATV and Klub Radio. That has a “trickling down effect”. And that is the big experiment.  If RTL Klub can continue this experiment, we will see what changes this brings about.

Haraszti believes that if RTL Klub can hang in there Hungary will not become “a typical Eastern-type media system” because there will still be at least one independent source of mass media.  He feels independent media outlets ATV and Klub Radio are “segment channels” that are “preaching to the converted”.  He adds that were they to become an independent source of news as opposed to merely commenting on the news generated by the government news service, then the government would “work much harder to drive them out of business too”.

With regard to the proposed internet tax, subsequently withdrawn after two mass protests, Haraszti calls it a “world first” and says its goal to “completely kill what few independent sources of information remain, which is none other than the internet.”

Today the internet does not yet have the decisive effect on elections as television but they know that the internet is the future. Just like Putin in Russia, Nazarbayev in Kazakhstan, Aliyev in Azerbaijan, we are now seeing the beginning of the war against the internet “before it is too late”. This has to take place before the internet with its growing bandwidth evolves into “push media” which is just as intense as television. Once greater bandwidth allows for television-like broadcast over the internet, then the political significance of the internet will change. It will no longer consist simply of fragmented social media networks. It will be just as much concentrated as television is today. When that happens the illusion of the illiberal democracy will also end because people will have access to real news.

BB: How informed are foreign diplomats about what is happening in Hungary?

MH: They are very informed, as we can see from the United States’ reaction to what is happening in Hungary. European countries are also well-informed. It is important to note that they see what is happening in Hungary as something the Hungarian people must deal with. They are beginning to see Hungary as having an “elected autocracy”, that is autocracy with elections. There’s no doubt they are already manipulating the electoral system. For the time being Fidesz has managed to secure a relative majority with such tricks.

Haraszti says the most important of these “tricks” is controlling the media.

Securing this kind of power has two important parts. The relative (parliamentary) majority is secured with the help of the media. The other rules are manipulated in such a way that ensures the relative majority translates into a two-thirds parliamentary majority. Together these two things ensure total rule and dominance.  Fidesz kept only one thing from the previous constitution: with a two-thirds parliamentary majority you can do anything in parliament …  Everything else, that is the checks and balances, media freedom, separation of powers, independent government institutions, have all been done away with. The two-thirds rule is the only one they’ve kept, of which they are jealously protective.

He is pessimistic and yet remains hopeful.

There are only two cases of this kind of elected autocracy in Europe which have neither oil, nor a coastline, nor vast territory: Belarus and Hungary. These two powers act as if they have oil but in reality they both depend in part on European money, as in the case of Hungary, and in the case of Belarus it is living off of Russian patronage.

Haraszti says that for the last 5-6 years President Putin has been pursuing a foreign policy which he refers to as a “reverse Marshall Plan” in which Russia props up autocratic regimes in neighboring countries.  “In this way Russia hopes to be a thorn in the side of the European Union”.

He says Hungary is also becoming this kind of state but he does not believe the xenophobic, anti-EU policies of Prime Minister Viktor Orbán and Fidesz are sustainable.

Ever since Orbán’s Tusnad speech international public opinion has turned against him. I’m very worried that Hungary is progressively turning towards Russia but this is also what I believe Hungary will not tolerate. Hungary’s right-wing will also not accept this. The European right will not accept this.

Harazsti believes there will be an awakening of moral indignation that will bring to an end Orbán’s experiment with “illiberal democracy”.  However, he warns about the person of Orban, who he says “can only politicize through creating conflict” predicated on anti-European Union and anti-United States sentiments and fake “freedom fights”.

When the pot runs out of goulash, then the goulash autocracy will also end, just as it did in the case of goulash communism.