The militarization of Russia 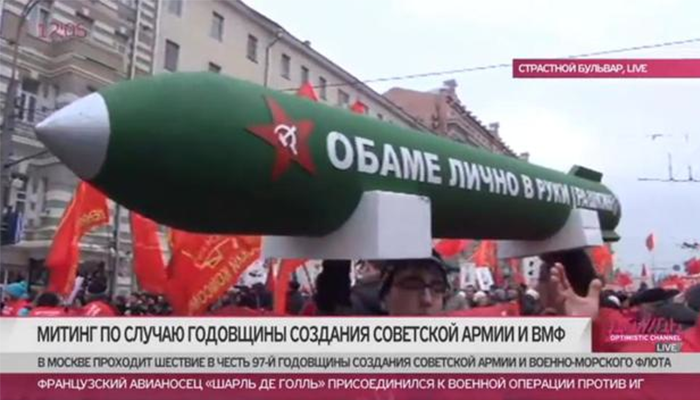 “To be personally delivered to Obama”

By Slava Tsukerman for RealReporting.org

On February 23, Russia celebrated “Defender Of The Fatherland” day.  This holiday was established in Soviet time to commemorate the  date of the founding of the Red Army in 1918.   During the  Soviet era the day was called “Red Army Day.”

This year’s celebration was marked by an interesting message on the side of a missile carried by Muscovites parading in the center of the city: ”To be personally delivered to Obama.”

This year the celebration was an indication of the unprecedented growth of militaristic fervor in the country. During this year, the number of Russians who believed that relations between Russia and the US are hostile had increased 10 (!) times.

This has never happened before in the entire post-Soviet history. The number of those who believe that Russians should now distance themselves from the West has reached 40%.

Also unprecedented is that 80% of Russians prefer relations with China.

At a record level is the feeling of a military threat to Russia from other countries – 68% (in 2000 it was 48%).  82% believe that the Russian military is capable of responding to these threats. 55% (also a record) of Russians are willing to send members of their family to fight.

Russian Internet is full of photographs of children having lessons on the use of  weapons in their schools. 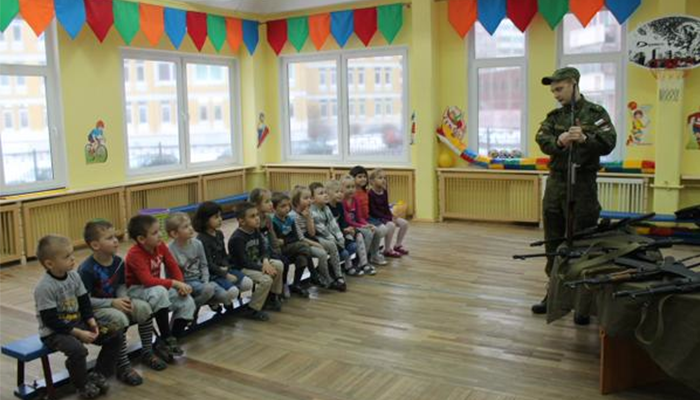 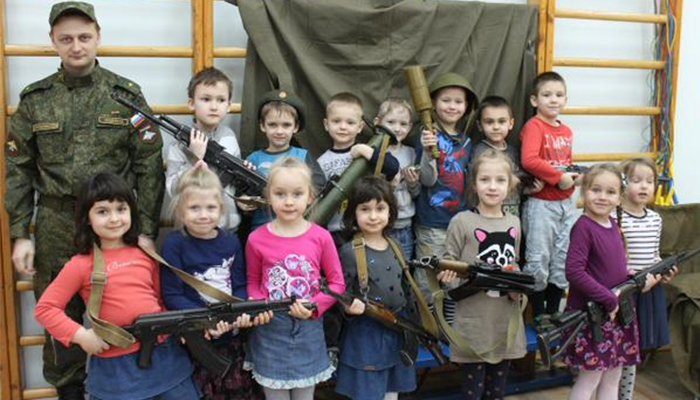 Alena Sterligova, a well-known Russian fashion designer and the wife of an eccentric billionaire and politician, German Sterligov, presented a militaristic fashion show. In the show every costume is supposedly the matching color and style of one of the popular Russian guns.

The reason for the choice of this particular date is not specified in the document. However, media is discussing the fact that it is the date of the beginning of the annexation of Crimea.

On the night of February 27, 2014, members of Russian Special Forces, referred to in the Russian press as “polite people”, seized the building of the Supreme Soviet in Simferopol and installed Russian flags on the roof.

The decree establishing the new holiday was signed on February 26, 2015, leaving no time to prepare for the celebration.

Nevertheless the world had a real surprise this February 27, 2015 day: the assassination of the best-known Putin critic, opposition leader Boris Nemtsov.