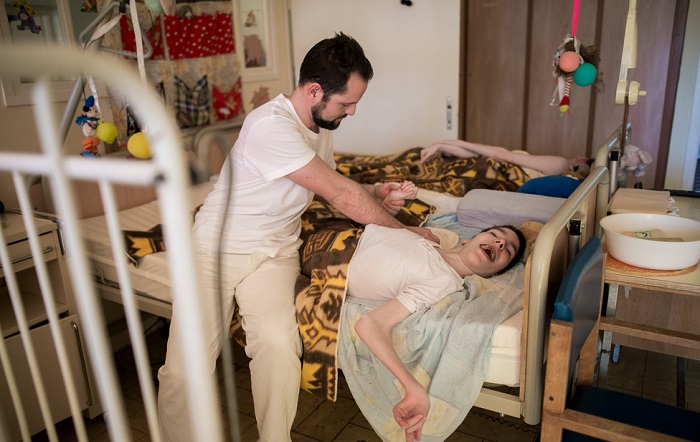 The Ministry of Human Resources (EMMI) failed to act on internal reports of abysmal conditions at the Topház Special Home, a care facility for the mentally disabled in Hungary, according to documents recently acquired by a public information request.

The shocking conditions at the facility were revealed in a May report by the Mental Disability Advocacy Center (MDAC), which concluded from an investigation that children and adult patients of the home had been tortured and abused, including being tied to beds and restrained with makeshift straitjackets.

But findings submitted to EMMI more than half a year before the MDAC report detailed findings of similar abuses, to which the ministry made no response.

According to public information documents obtained by opposition party Politics Can Be Different (LMP) co-chair Bernadett Szél, the Hungarian Directorate-General for Social Affairs and Child Protection – an EMMI organization – informed the ministry in October 2016 of “unacceptable violations” of the patients’ rights due to a lack of professionalism among the staff and the deterioration of the facility.

Similarly to the MDAC report, the Directorate-General for Social Affairs and Child Protection reported to EMMI in October 2016 its findings – based on a year and a half-long investigation – of patients tied to beds with sheets, locked into beds with iron bars, sleeping on beds without mattresses, and flood-damaged and moldy bathrooms. The organization concluded that the facility was overcrowded, lacked sufficient toilets and washrooms, and lacked adequate staff.

Renovation works recommended by the Social Affairs and Child Protection organization in its report were largely uncompleted due to insufficient funding received by the facility.

(Incidentally, this week the government reallocated HUF 90 million from the same Social Affairs and Child Protection organization, awarding it instead to sports in Hungary.)

The Ministry of Human Resources failed to act on its organization’s findings at the Topház Special Home, and denied any such problems existed after the publication of the MDAC report in May. Károly Czibere, social affairs undersecretary with the ministry, said during a committee hearing in parliament shortly after the publication of the Mental Disability Advocacy Centre report: “What [MDAC] claims to have seen simply does not exist.”