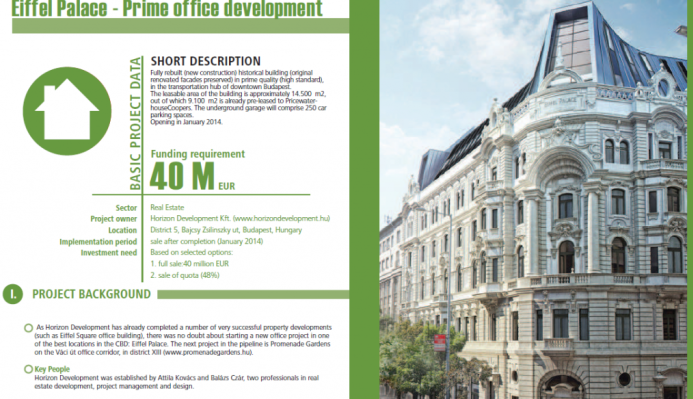 The Hungarian National Bank (MNB) paid more than EUR 5 million over the asking price when it bought the Eiffel Palace for EUR 45.3 million in July. The office building was advertised for EUR 40 million in January, a luxury property brochure aimed at foreign buyers and published by the National Investment Agency reveals. The publication, which was created to invigorate real estate investment, advertises eight projects at prices ranging from EUR 20-515 million. As the investor – with an offshore background – spent less than EUR 31 million on the property purchase, it made nearly EUR 15 million profit, Átlátszó revealed last week.

Attila Kovács, the Eiffel Palace CEO, denied that the company’s ownership structure was not transparent, as it has one Hungarian and one foreign owner. However company databases reveal that the owners of Eiffel Palace at the time of the July 28 sale had been a Cyprus-registered offshore company (Qualmiston Ltd) and Hungarian firm EFPA Estate Ingatlankezelő, the latter owned by Stringston, an offshore company registered in the Lesser Antilles. The company court deregistered Stringston after the sale of the property, with effect from August 1.