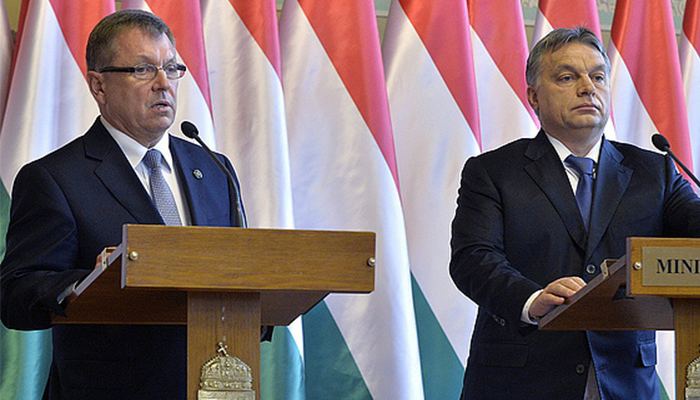 At a joint press conference held Thursday morning, National Bank of Hungary (MNB) governor György Matolcsy and Prime Minister Viktor Orbán did not merely announce that the central bank was extending a “protective net” to the Hungarian Credit Bank (MKB) which the government acquired in July for EUR 55 million, but that the government was turning over its ownership rights in MKB to MNB for the purpose of “reorganizing” the bank.

Judging from Matolcsy’s comments, the “reorganization” will involve recapitalizing the bank whose loan portfolio contains a number of non-performing loans.

The reason for transferring ownership of MKB to MNB may be that by arranging for the latter to use existing assets to recapitalize the bank, the government avoids having to allocate additional public funds for this purpose.  The government may hope that this, in turn, will enable Hungary to keep its deficit to under 3 percent of GDP in 2014 and 2015, thereby avoiding once again becoming the subject of a European Union “excessive deficit procedure”.  Such a procedure could very easily result in the suspension of EU development grants.

At a press conference on Friday deputy MNB chairman Ádám Balog claimed that the central bank had notified the European Central Bank about the decision in a timely manner consistent with its EU obligations, but that it had not gone into details.

According to napi.hu, neither the European Commission nor the European Central Bank were informed that the government intended to turn over its rights of ownership to the National Bank of Hungary.

European spokesperson for financial services and capital markets, Vanessa Mock, and Ricardo Cardoso, spokesperson for competition, told napi.hu that EU directives allow for the financial oversight authority in member states to assume control of a bank if it fails or is likely to fail, or if national interests dictate that the bank’s critical functions be maintained rather than putting the bank into receivership.  Mock confirmed to napi.hu that in Hungary’s case, the National Bank of Hungary is the oversight authority but that the European Commission will need to be convinced that by transferring ownership of MKB to the central bank, Hungary is not running afoul of EU regulations prohibiting commercial enterprises from receiving state subsidies.