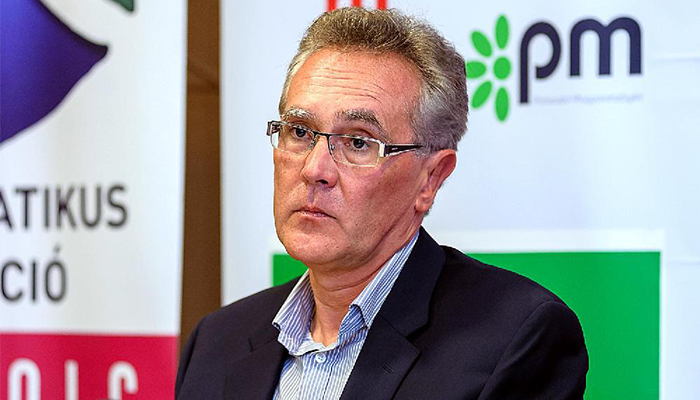 Former Miskolc police chief Albert Pasztor has been nominated by the Hungarian Socialist Party (MSZP) and the Democratic Coalition (DK) to be their candidate for Miskolc mayor in municipal elections scheduled to take place in autumn.

Pasztor was criticized five years ago for legitimising the term “gipsy-crime” as being applicable to criminal acts committed in the city. He said: “We can safely state that the offenders in public thefts are gipsy people. In Miskolc actually only banks or gas stations are robbed by Hungarians.  All the other robberies are committed by [Roma].”

Pasztor’s comments were sufficient to have him temporarily suspended as police chief, with then-prime minister Ferenc Gyurcsány calling them “nauseating”.  The comments made Pasztor a popular man in Miskolc, so popular that Jobbik allegedly approached him about being their candidate for mayor, but was rebuffed.

The fact that Gyurcsány and the Socialists are prepared to run Pasztor says a lot about Hungary’s wholesale drift to the right.  In the April general election Jobbik overtook MSZP to become Hungary’s second-largest party.

It also says a lot about Gyurcsany and Hungarian left-wing politicians in general, although Together-PM subsequently withdrew its support of Pasztor’s nomination.

Reacting to criticism from opposition figures and liberal intellectuals, Gyurcsány explained their decision in a statement published on galamus.hu.

Pasztor’s candidacy generated a passionate debate in the party. I do hear and understand our critics. I am completely settled on the issue myself, yet I believe that eventually, we made the right choice.

Gyurcsány then goes on describing his view on the critical conditions in terms of public security and the social situation in north-eastern Hungary.

We are in a trap. There is an allegation presumed to be true by many, saying that the ratio of criminals is higher in the Roma community than elsewhere. But we have no factual evidence supporting this claim. We don’t know what is the case because of the lack of statistics in the matter, and following the terrible Shoah and Pharraimos (the Roma genocide committed by the Nazis and their allies during the Second World War), we are instinctively repellent to such ideas.

Gyurcsány criticized Pasztor’s 2009 words as being “badly formulated” and lacking important other perspectives that would have offered a more realistic picture on the situation. The former PM described the situation in Miskolc as critical.

In Miskolc, masses of Roma and non-Roma are facing each other. They are glaring at each other, and non-Roma often have to run from the Roma. We can muse about integration, but there in Miskolc and in thousands of other communities, there is only separation and fear. And growing hatred. I am saying a hatred between two groups of Hungarians: Roma Hungarians and non-Roma Hungarians

In conclusion, Gyurcsány defended his party’s candidate as an “honest democrat” who “opened a door in a bad way, yet that door needed to be opened”.

Fidesz has been quick to exploit Gyurcsány’s flip-flop.  When asked by pro-government Lánchíd radio to comment on the alleged attempt of the political opposition to “gain the support of far-right parties” as supposedly evidenced by its choice of candidate for Miskolc, the Fidesz vice-chairman said “they would even partner up with the red-hoofed devil itself for the sake of acquiring power”.

Doubtless many traditional left-wing voters must be wondering whether there is any truth to this statement.