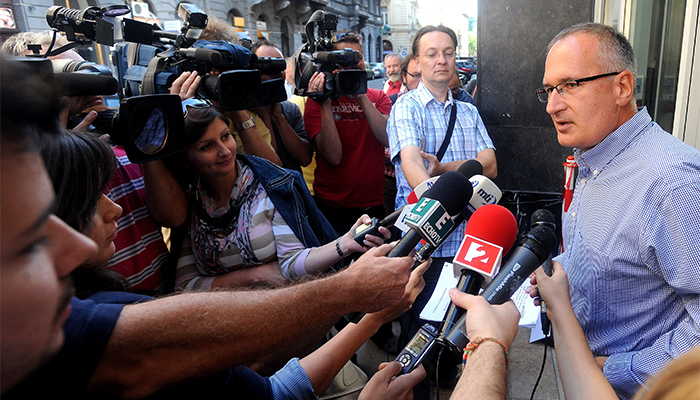 Hungarian elections are invariably preceded by allegations of corruption, especially after the January deadline for government officials and members of parliament to declare their personal assets in writing.  The media frenzy ensuing from last week’s submittal deadline has claimed its first victim: MSZP deputy chairman Gabor Simon was forced to suspend his party membership and resign all party positions today after news broke that he had failed to disclose some EUR 770,000 kept on deposit at the Volksbank in Austria.

Last week pro-government Magyar Nemzet reported that a senior MSZP politician was the subject of an official investigation for failing to disclose several hundred million forints worth of assets kept abroad. Today the same newspaper named the politician and the amount. According to Magyar Nemzet Simon deposited EUR 575,000 and USD 162,954 in an Austrian bank account on 10 April 2009, and that his balance as of 16 October 2013 was EUR 770,000.

Hvg.hu writes that it is not clear from Simon’s earlier filings what the source of the money could be.  Simon told members of the Hungarian press today the same thing he reportedly told the Volksbank in 2009: that the money originated from the sale of a company and a Budapest property.

According to index.hu, Simon opened his account at roughly the same time Volksbank was chosen by the then MSZP controlled 18th district government to underwrite a EUR 10 million (HUF 3 billion) municipal bond, despite Volksbank’s offer being the most expensive.  The cost of issuing the bond alone was 2 per cent of its face value or HUF 60 million (EUR 200,000).

Hvg.hu reports that MSZP received the news with astonishment and disbelief  quoting one MSZP politician as saying that “Gabor Simon was the last person anyone would imagine kept money in a foreign account.”  However, one PM (Dialogue for Hungary) member told hvg.hu that “MSZP is full of similar landmines which the governing party’s media will detonate one by one in the following weeks.”

According to MSZP party spokesman Gabor Veres, MSZP party chairman Attila Mesterhazy, who is in the United States, has convoked a meeting of the party’s relevant bodies for this Thursday to discuss the matter at which time the party will make a “definite and clear decision”.  However, hvg.hu reports that Mesterhazy instructed Simon to suspend his party membership and immediately resign all positions within the party and withdraw from politics altogether.  It is not known whether Mesterhazy made his decision before or after Simon told his MSZP inquisitors that he kept the money in Austria because “one cannot rely on the financial stability of Hungarian banks”.

Gabor Simon joined MSZP in 1994 and quickly rose through the party’s ranks.  Between 2004 and 2012 he served as the president of its executive committee. In 2012 he resigned his position on the executive committee to become deputy chairman.   An MSZP member of parliament since 2004, he was the MSZP (and opposition alliance) candidate for Budapest’s 15th electoral district, as well as the twelfth person on the the national list, essentially assuring that he would be elected to parliament in elections scheduled to take place on April 6th even if the opposition alliance performed as badly this year as MSZP did four years ago. According to hvg.hu Simon is likely to be replaced with MSZP politician and education expert Agnes Kunhalmi.

Today the chairman of the parliamentary committee on parliamentary immunity, Gyorgy Rubovszky, announced that he had sent a copy of the two Magyar Nemzet articles to Simon and given him five days to declare whether he acknowledged the mistake and wished to correct the filing.   The committee is scheduled to meet next Tuesday and is expected to suspend Simon’s immunity from prosecution. Nol.hu reports that the state prosecutor’s office asked the committee back in March 2013 to suspend Simon’s immunity for allegedly aiding and abetting a crime committed while state secretary for employment and work matters during the MSZP government of Ferenc Gyurcsany.

Index.hu writes that the current Fidesz led Budapest 18th District government filed the first of some 40 complaints relating to the 2009 bond issue in 2011, and that, prior to contacting the Austrian bank on behalf of the Hungarian authorities, the Hungarian National Bank notified Simon of its intention to do so.  It is not known whether Simon availed himself of the opportunity to contest the Central Bank’s decision, or whether he informed his party about this development.

One of the capital city’s poorest districts, Budapest’s 18th district has long been one of the important chapters of the Hungarian Socialist Party.  Index.hu writes that Simon fostered close personal connections with the heads of the district chapter of the MSZP party, in particular with former district deputy mayor Sandor Szaniszlo and MSZP city councilman  Peter Koros. Index.hu reports that between March 1999 and September 2003 the district paid Simon a monthly honorarium in the amount of HUF 250,000 (EUR 1000), for a total of more than HUF 9 million (EUR 36,000).

By law members of parliament and government officials are required to file a report disclosing their personal assets at the beginning of each year.  As they are not required to disclose the assets of their spouses or close family members, many question its usefulness as means of deterring corruption.  In the court of public opinion, any asset not reported or reported but kept in an off-shore bank account is presumed to have been obtained unlawfully.  In 2009 former central bank governor Andras Simor came under intense criticism after disclosing that he had transferred HUF 850 million (EUR 2.75 million) of his personal wealth to a company he owned in Cyprus.  Although he volunteered to repatriate the money to Hungary, the appearance of impropriety tainted the balance of his central bank governorship.

Ironically, in 2002 Gabor Simon formally challenged Prime Minister Viktor Orban’s declaration of assets, claiming that it showed a “disproportionate” increase in wealth at odds with earlier filings.  It seems Simon has just learned one of the first lessons of politics:  “Judge not your political opponents lest you yourself be judged”.