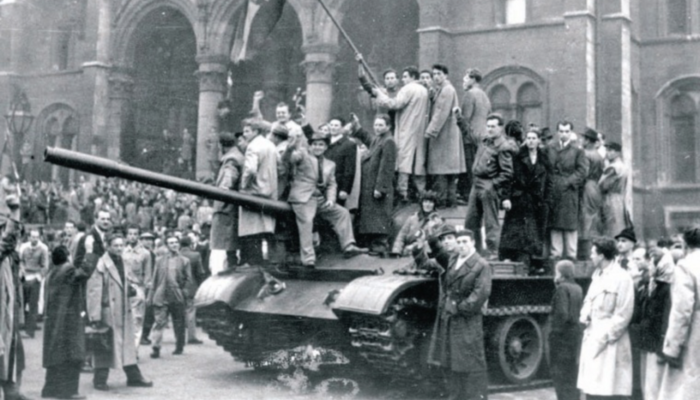 A conference was held Monday at the Hungarian Academy of Sciences (MTA) on “The impact of the 1956 revolution and freedom fight on the changing of the system,” reports 24.hu. The conference opened a week-long program at the academy to discuss the 1956 revolution, which started 60 years ago this Sunday.

Péter Tölgyessy, researcher at the academy’s Political Science Institute, spoke at the conference, stressing that there were major differences between the revolution of 1956 and the transition from communism in 1989. He argued that no one wanted a revolution in ‘89, and that the most important goal at the time was that “there just shouldn’t be another ‘56.”

“One of the biggest differences between the revolution and system change was that the average person looked at the latter fearfully from the outside,” he said. The Communist Party did not want another ‘56 in ‘89 and did not want politics out in the streets, because its main aim was holding on to power, he added. The main goal was that the system should change without breaking.

This disconnect between the average person and the events taking place affected the efficacy of the system change, Tölgyessy argued. The system change had been most effective in those countries in which average people participated directly. In ‘56 in Hungary, there were direct participants in the process, which was lacking in ‘89. This disconnection was indicated by rates of participation in Hungary’s first free election after the transition: in other post-socialist countries there was more than 90 percent participation in the first elections. In Hungary, it was barely 65 percent. Hungarians didn’t have the chance to experience the “festive and joyful atmosphere” on the streets, and since there wasn’t direct participation in the change, it didn’t feel legitimate later.

Imre Kónya, former minister of the interior under the Péter Baross government (‘93-’94), said the ‘56 revolution was an inspiration for the political opposition at the time of the system change, and its influence helped the opposition to form a unity and to hold it together. Because of that unity, he said, the power backed down because it realized that there was a real political force in the opposition.

Still, Kónya acknowledged that people have negative opinions about the system change because they didn’t receive the uplift they expected. But he argues that it is not the fault of ‘89, but that “real national cooperation disappeared and society was divided.”