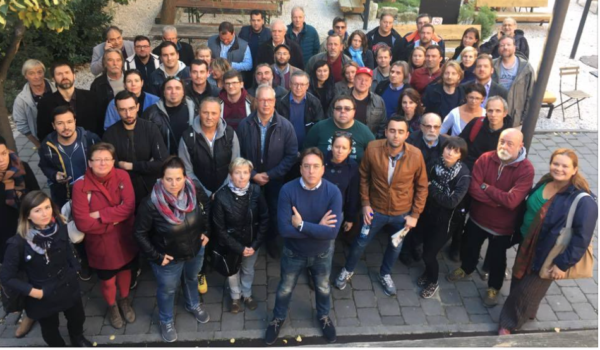 “There will no longer be printed a kind of newspaper like Népszabadság” – Péter Pető, deputy chief editor of Népszabadság

Mediaworks Kft. released a statement late Tuesday declaring that the editorial staff of Népszabadság had cancelled an appointment with the company to negotiate for the possible acquisition of the paper, reports 444.hu. The paper’s head editor denies having cancelled the meeting.

Mediaworks, the publisher of the opposition print daily, abruptly shut down operations of both the print and online version of Népszabadság on Saturday. Since then the paper’s entire 80-member staff, from the journalists to the janitors, have yet to be informed what will become of their jobs. The editorial staff agreed to meet with the publisher concerning negotiations for purchasing the paper on Monday, but the meeting was cancelled due to Mediaworks acting CEO Viktor Katona resigning for “health reasons” after only three days on the job. The negotiations were rescheduled for Tuesday, but Mediaworks released a statement Tuesday evening declaring that:

“The meeting initiated and planned for today by Népszabadság’s head editor concerning the paper’s potential acquisition was cancelled by the head editor a short time before the negotiations were to begin. We have not received a proposal for rescheduling from the editorial staff.”

Népszabadság journalists told 444.hu they were surprised at the statement, as chief editor András Murányi had already personally informed them about the meeting. Murányi later told state news service MTI that he “learned of Mediaworks’ statement with surprise,” because he had told their management he would begin substantial negotiations when the publisher had addressed the uncertain situation of the paper’s employees.

(It sounds to us as though Mediaworks seized on this as an excuse to cancel the negotiations and pin the blame on Murányi-ed.)

The paper’s journalists and technical staff have held together thus far. None have moved on in search of work elsewhere, reports 444. This is partly because none of them have officially been released, and they do not know when or if they will receive their wages or severance pay. For now the paper’s editors are focused on one thing: Mediaworks must pay the employees and satisfy its legal obligations to them. Only then can negotiations concerning the paper’s future begin in earnest.

Even if negotiations finally do take place, however, many hurdles stand in the way of resuscitating the 60-year-old publication. The Hungarian Trade Bank (MKB) has registered a lien on the paper’s trademark name in August, and some have speculated that the paper might be bought by oligarchs close to Prime Minister Viktor Orbán.

Népszabadság deputy chief editor Péter Pető told students at ELTE university’s media department: “There will no longer be printed a kind of newspaper like Népszabadság.”