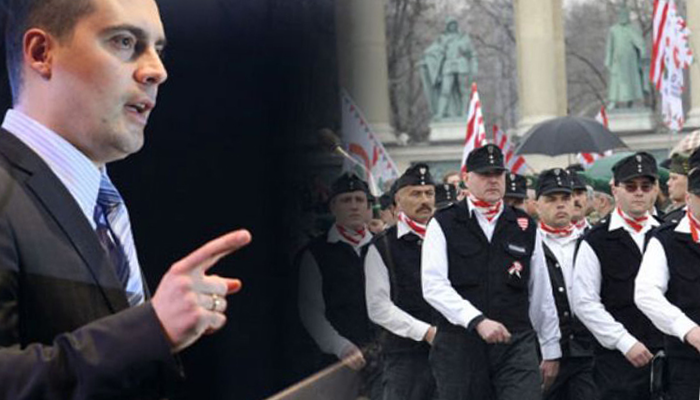 “Attention [French] [Canadian] [Dutch] Hungarians!
The Facebook page for Jobbik sympathizers living in France has been launched. By clicking here you can receive news about Hungary, and receive updates about developments concerning the 2014 elections.

The US page contains a slightly different message:

Due to temporary difficulties (our original profile had become inaccessible), we have made a new page for our Hungarian supporters living in the United States. From now on this page will be our official Facebook page, and by clicking here you can receive news about us, and also receive updates about developments concerning the 2014 elections. [link to URL]

The party’s name is a play on the Hungarian word “jobb” which means “better” as well as “right”.  Jobbik defines itself in terms of its virulent opposition to Jews, gypsies, homosexuals, and multi-national corporations.  Founded in 2003 by its chairman, Gabor Vona, Jobbik went from political obscurity to being Hungary’s third largest party in under seven years.  Performing poorly in 2006 parliamentary elections, Jobbik won enough votes in the 2009 European parliamentary elections to send three delegates to Brussels.  One of them, Csanad Szegedi, left Jobbik in 2013 after discovering that his maternal grandmother was Jewish–the only member of her Jewish Hungarian family to survive Auschwitz.

In parliamentary elections held the following year Jobbik won 16.7 per cent of the popular vote which translated into 47 seats in parliament.  The election of an extremist party to parliament was widely remarked on by the foreign press at the time. Since then four Jobbik MPs have left the party.

Jobbik’s sister organization, Magyar Gárda, (Hungarian Guard) is an all volunteer militia that doubles as Jobbik’s honor guard.  But whereas Jobbik enjoys wide-scale support among middle and upper-middle class professionals, Gárda rank and file is largely drawn from the Hungarian working classes (or not working, as the case may be).  Gárda members wear black uniforms with red and white striped scarves modeled on the flag of Hungary’s founder, Arpad, known as “Arpad stripes”.  When not on parade the Gárda combats “gypsy crime” by marching through impoverished Roma neighborhoods sporting insignia and carrying flags and banners resembling those of the fascist Nyiláskeresztes Párt (Arrow Cross Party) during the Second World War.

After being banned in 2009, the Gárda was reorganized into several successor organizations including the Új Magyar Gárda (New Hungarian Guard).  Since then Gárda members old and new have attended numerous public rallies, participated in a wide range of demonstrations, and even attended the recent unveiling of a bust to Admiral Miklos Horthy.

In March 2011 another offshoot of Magyar Gárda, the so-called Civil Guard Association for a Better Future, patrolled the town of Gyöngyöspata for several weeks allegedly to protect the town’s Hungarian majority from its Roma minority.  The action sufficiently polarized local opinion to get local Jobbik politician Oszkar Juhasz elected mayor in by-elections held in July 2011.

In retrospect, Gyöngyöspata appears to have been a pyrrhic victory for Jobbik.  After local Roma clashed with members of the Civil Guard, an act of parliament expressly banned “uniformed criminals” from engaging in policing activities, punishable by fines and imprisonment.  With the Gárda stripped of its ability to intimidate minority communities and many Jobbik followers put off by images of skinheads threatening Roma women and children with whips and pitbulls,  popular support for Jobbik plummeted.  Since then Jobbik has been fighting a rearguard action to preserve its electoral base from the onslaught of governing parties Fidesz and KDNP, whose attack on  foreign owned banks and public utility companies is proving very popular with voters across the political spectrum.

In 2013 Jobbik repositioned itself as the party of young people with particular emphasis on job creation and environmental protection.  The strategy appears to be working. According to a recent opinion poll, 14 per cent of decided voters likely to vote in this year’s parliamentary elections said they would vote for Jobbik, up from 13 per cent the previous month.