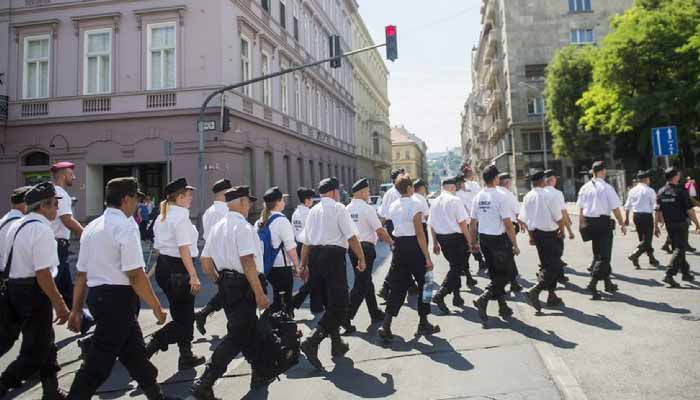 The New Hungarian Guard, the successor to the banned Hungarian Guard, held a day of camaraderie in Budapest on Saturday. Speakers at the event talked about there being a world war situation, the Hungarian nation needing people who can defend the country, the United States financing the wave of migrants arriving in Hungary and Europe, and shadow governments controlling the world.

Co-founder Levente Murányi, a hero of the 1956 uprising, told the assembling guardsmen that there is a world war taking place. This war, he said, is being fought with entirely different weapons than those used during the first two world wars.

“American money is being used to bring refugees into Hungary and Europe and there has not been a single Hungarian government who fought for Hungarian national interests,” he said, calling on those assembled to be “the protectors of Hungarian freedom.”

Reformed Church minister Loránt Hegedűs, whose wife is a Jobbik member of parliament, talked about there being a “shadow government” that deliberately creates chaos around the world.

This shadow government, Hegedűs said, is responsible for the wave of refugees arriving in Hungary and for the outlawing of the Hungarian Guard.

The Hungarian Guard and successor organizations, such as the Civil Guard for a Better Future that lay siege to the Roma quarter of Gyöngyöspata and other Hungarian villages in 2011, were banned for deliberately and systematically intimidating Hungary’s national minorities, particularly its 800,000-strong Roma population.

While Jobbik president Gábor Vona did not actually attend the event, he did send a congratulatory letter to the New Hungarian Guard on the special occasion.

“I was a member in the past, I am still that today, and I will also be your comrades in the future,” Vona wrote.