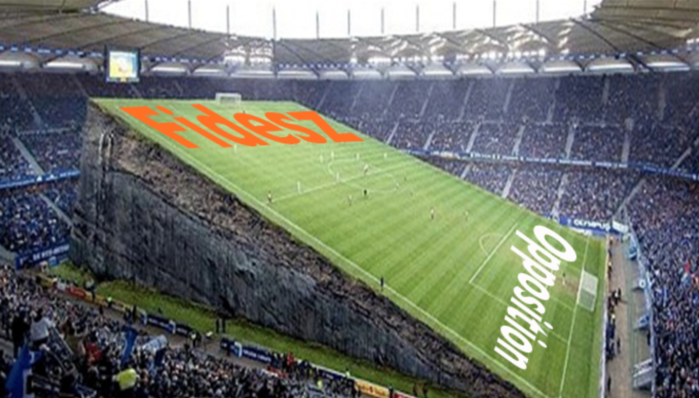 Nine opposition parties will support an initiative by Common Country (Közös Ország) to reform Hungary’s election system, reports 444.hu. Democratic Coalition (DK), Together (Együtt), the Hungarian Socialist Party (MSZP), Politics Can Be Different (LMP), Momentum Movement, Hungarian Two-Tailed Dog Party (MKKP), the Hungarian Liberal Party (MLP), Movement for a Modern Hungary (MoMa) and Dialogue for Hungary (PM) will participate in public debates on election reform, and help to prepare a legislative proposal for submission to the National Assembly for a vote before the symbolic deadline of October 23.

Közös Ország is a grassroots initiative founded by activist Márton Gulyás during the wave of anti-government protests in Spring triggered by the controversial passage of the higher education law commonly referred to as Lex CEU. The law sparked outrage as its provisions seemed intent on forcing the George Soros-funded Central European University to close its doors. Gulyás announced at a large demonstration at Budapest’s Szabadság square in April that Közös Ország would launch a campaign to reform Hungary’s electoral system, which the movement considers unfair and undemocratic. The movement’s aim, according to their website, is a more just and proportionate election system that reflects the will of Hungarian voters. If the National Assembly does not adopt changes by October 23, the movement has promised non-violent civil disobedience.

Throughout the summer Közös Ország held trainings to develop its inner structure and to prepare a campaign to gain support for election reform, which launched officially on August 20. Közös Ország has announced it will hold daily public debates beginning September 1 at a temporary social space called Agóra — a sort of open air theatre — which will be built for that purpose on Alkotmány Street near Parliament.

Közös Ország says the nine opposition parties will debate their respective opinions regarding the needed reforms in order to reach a consensus that will be incorporated into a concrete legal proposal, planned to be ready for submission to the National Assembly by September 20. One of the participating parties with a parliamentary delegation will make that formal submission to the National Assembly. The group has also invited Jobbik and Fidesz to the public debates.

Közös Ország told the Budapest Beacon that despite Jobbik’s usually staunch opposition to cooperating with any left wing opposition parties, the radical-right party has indicated its willingness to coordinate with the movement. Jobbik has reportedly already submitted its proposal to Közös Ország about reforming the electoral system.

Jobbik decided not to appear in a video posted by Közös Ország on its Facebook page Sunday, where members of the nine participating parties gave their reasons for supporting the movement’s campaign to change election laws. But according to a movement spokesperson, coordination with the radical right-wing party is still underway regarding its participation in the Agóra debates.

Jobbik MP and spokesperson Dóra Dúró posted a statement on her Facebook page on August 18 stating that Jobbik is eager to send its professional reform proposal to anyone, and acknowledged that her party had sent their proposal to Közös Ország. But Dúró also stressed that Jobbik would not participate in any kind of political cooperation with the “discredited” left-wing parties that “had ruined the country earlier.”

In accordance with the movement’s aims to radically reform the political sphere, Közös Ország elected four female spokespersons: Anna Mészár, Szilvia Budija, Barbara Zajtai and Eszter Vörös. The movement has referred to the current underrepresentation of women in Hungarian politics: only 20% of the MPs in the National Assembly are women. However, Mészár told 24.hu, that strategy could change in the future.

Közös Ország said the movement’s ultimate goal is to build community and show how public matters can be publicly debated.