Norwegian Civil Fund administrators to Janos Lazar: We are not a “useless group of partisan tricksters” 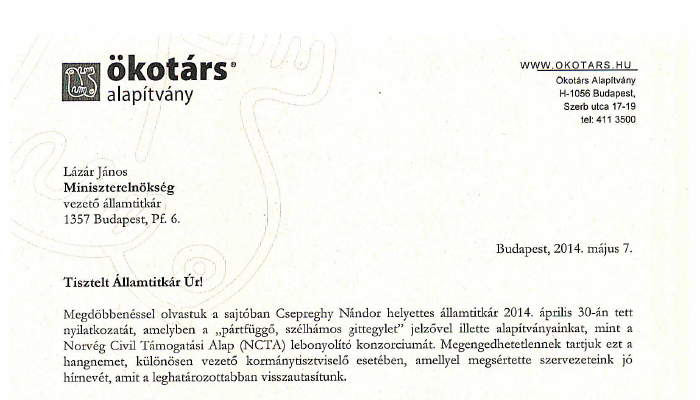 The heads of four grant making foundations have sent a letter to Janos Lazar, Secretary of State for the Office of the Prime Minister, categorically rejecting disparaging remarks made by Deputy Secretary of State Nandor Csepreghy to the Hungarian press.

In mid April Lazar accused the Norwegian Civil Fund of interfering in Hungary’s internal affairs by allegedly funding organizations with close ties to liberal party Politics Can Be Different (LMP).  In an exclusive interview Ökotárs CEO Veronika Vera told the Budapest Beacon “(t)his is all about Fidesz wanting exclusive authority to decide who gets how much”.

On April 30 Deputy Secretary of State Nandor Csepreghy was quoted by the Hungarian press as saying that Norwegian Civil Fund’s Hungarian administrators were a “useless group of partisan tricksters”.

In their letter of May 7 the heads of the four grant making foundations highlight their positive relationship with the Hungarian government in recent years and their willingness to involve it in their efforts to strengthen Hungary’s civil society. The letter concludes by inviting Lazar to personally visit with the foundations to better understand how they operate – an experience that might help the government learn how to effectively administer funds through its own grant-making institutions.  The letter also asks that Csepreghy retract his insulting statement.

In a letter addressed to Janos Lazar dated April 24 the Norwegian Ministry of Foreign Affairs rejected his accusations as “surprising” and invalid.

It was with great consternation that we read Deputy State Secretary Nandor Csepreghy’s statement to the press on April 30 in which he refers to our foundations, the administrators of funds provided by the Norway Civil Fund (NCTA), as a “useless group of partisan tricksters”. We consider these accusations to be unacceptable, especially coming from a representative of the government, as they insult the good reputation of our organizations, and firmly reject them.

We would like to remind the State Secretary that the Okotars Foundation-led consortium’s activities are not limited to the administration of the Norway Civil Fund. There are numerous other programs we are engaged in and these programs are in accordance with the achieving of our goals as prescribed by the Basic Law: to further develop and strengthen the Hungarian civil sector. Over the years, these programs have produced a fruitful collaboration with government actors as well.

Nandor Csepreghy’s statements have been made in complete disregard of the aforementioned work and have added insult to injury not only to us, but also to Hungary’s civil society organizations who have worked so selflessly for the betterment and in the interest of the Hungarian public. For this reason we implore the State Secretary to demand that the Deputy State Secretary retract the statements he made!

In the meantime, and in the spirit of continuing our constructive and collaborative partnership, we happily invite the State Secretary to visit us personally so that we may show him the details regarding how the Norway Civil Fund operates, its experiences and the results it has achieved, so that the shared knowledge may contribute to the better operating of other fund-distribution systems and related institutions.

President, Foundation for the Advancement of Democratic Rights