Not a trace of media pluralism remains in Hungary, say experts 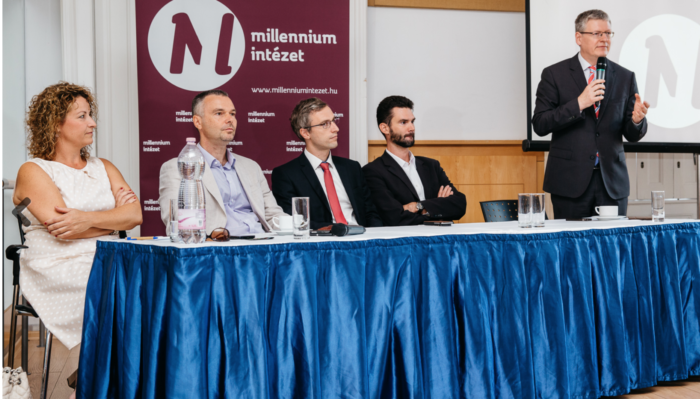 “For years we’ve prepared a so-called ‘light censorship report’ but this expression is a euphemism.  There really isn’t any point to calling it light.”  “Let’s not be ashamed to call the system autocratic.”  “Public service media has failed in Hungary.”  “No trace of media pluralism remains.”  These and similar statements were made at Wednesday’s “What comes after the directed media?” roundtable discussion that took place in Budapest.  A number of media experts attended the Millennium Institute event

“We invited a number of people close to the government as well as government officials to explain how the current media situation has come about, but nobody came,” announced András Pulai in his short introduction.  The Publicus Institute director warned of Russian attempts to influence Hungarian media.  He said media is in a state of transitioning in “the so-called post-fact world.”

Hungary’s new media law of 2010-2011 stirred up serious passions, according to László Andor (above right), former European Commissioner for Employment, Social Affairs and Inclusion.  Andor said the question is how “a sensible policy analysis can take place in relation to well-functioning and acceptable media policy elements.”

Economist Ágnes Urbán said: “For years we’ve prepared a so-called ‘light censorship report’ but this expression is a euphemism.  There really isn’t any point to calling it light.” The Mérték Media Analysis Workshop (Mérték Médiaelemző Műhely) researcher added: “The distortion of the media market manifests itself in many areas.”

The media expert called attention to the way the Media Council (Médiatanács) transformed the media market by awarding frequencies though public tender in a manner that benefitted the oligarchs of the period.  She said Class FM will probably lose its frequency in November “which it obtained seven years ago in inglorious circumstances.”

Urbán explained that in 2011 the Media Council prevented the merger of Axel Spring and Ringier.  “But it had no problem rubber-stamping” the merger of Pannon Lapok and (Népszabadság owner) Mediaworks.  She recalled that the Media Council had said last summer’s “the Hungarian reforms work” campaign was not a political campaign but a public information one.  With this the body had cleared the way for continuous government propaganda.

Mérték analyzed M1.  “They showed that this is pure propaganda,” she said, adding that all of this lacked transparency and it was not possible to know how Hungary’s public television company, MTVA, spent HUF 70-80 billion (USD 26-30 million) annually.

She said more money is going to friendly media than ever. “The capitalization is taking place in an unscrupulous manner.”  And legislation frequently concerned media, for example the advertising tax “custom tailored for RTL Klub in a negative sense.”  These days they were talking about restructuring the billboard and public space media market through “a tendentious legislation.”

“The fact that Lőrinc Mészáros became one of the largest media owners in Hungary requires no further comment,” Mérték said.   “We suspect (Vienna Capital Partners majority owner) Heinrich Pecina of being essentially a strawman but this cannot be proven.”

Attempts to blackmail a journalist as reported by 444.hu are “a return to the period before the system change,” she said, as is banning journalists from Parliament.

Local publicity has completely come under political influence, stressed Urbán. “Not a trace remains of media pluralism.”  Along with the publishing rights of twelve county papers, Mészáros had obtained over a million readers. “This could be fatal,” she said, warning that the so-called “public service media” was incapable of being reformed.  The Corvinus University faculty head said “they should close the taps.”

Media lawyer Gábor Polyák said the present situation constitutes a serious threat.  The ploughing under of Népszabadság and the devouring of the county papers strengthened the government’s power.  He believes the closure of Népszabadság is shocking not only because the paper ended, but because the stories the newspaper broke can no longer be taken over by other segments of the mass media.  “Of course, there are blogs where I can write my opinion but that is not the same as when journalists investigate things,” Polyák added.

According to the media expert, “the situation was not rosy between 2010 either, but in comparison to this, 2010 was a turning point,”  and the National Radio and Television Syndicate (ORTT ) “stood several rungs above the Media Council.”  He said that pre-2010 there was not as much of this type of political pressure as afterwards.

“Let us not be ashamed to call this system autocratic,” Polyák said, adding that “public service media has failed in Hungary.”

Writer János Széky of Élet és Irodalom (Life and Literature) commented: “Hungary never had a normal media market.” He said the audience was spoiled by certain media developments, such as the first media law of 1996. “The market which had been calibrated for a single-party system was replaced with a market calibrated for a two-party system.”

Széky said the two big commercial televisions were instructed not to politicize but rather to entertain and pay.  He recalled that in 2009 the Hungarian Socialist Party (MSZP) agreed to “an extraordinarily dark affair” only half a year before the 2010 election.  This was the decision by ORTT to award frequencies used by Sláger and Danubius to two companies, one of which was close to Fidesz and the other to MSZP, after László  Majényi resigned as chairman.  “The quasi two-party system modified the quasi one-party system,” said Széky, adding that the current media law also extends to print media, which, outside Hungary, can only be found in Russia.

He offered a few unsolicited comments about Brit Médiá, which acquired (print weekly) 168 Óra and (independent Budapest radio station) Klubrádió.  The Hungarian public only saw as far as Slomo Köves, the head rabbi of the United Hungarian Israeli Faith Community.  However, behind Brit Média stood Sándor Róth, who had multiple links to several post-Soviet oligarchs.

Seven quite large media companies have left Hungary over the past seven years.  Out of the seven, five came to be acquired by people close to the government, said Attila Bátorfy, journalist at online investigative journalism website Átlátszó.hu.

The Hungarian state spends billions on marketing in such a way that EU money is also included.  “Despite this, Brussels does nothing,” he explained, adding that even though the government justified the creation of the National Communication Authority on the grounds that it would improve transparency, “things have not become more transparent in the least bit.”

Bátorfy said the government advertises in Magyar Idők (Hungarian Times), which nobody reads, or on TV2, whose viewership is plummeting, noting that companies advertising in these media outlets are not an example of being “famous for their morality.”

The investigative journalist expounded on Polyák’s earlier comments that even though RTL Klub has yet to fall out of the picture, if there is no media from which to work, “then the present tiny and narrow free press will also end,” warning that, in theory, RTL Klub’s news broadcast could end at any time.