“NowUs” protesters to Merkel: “We believe in the rule of law, and we will restore it” 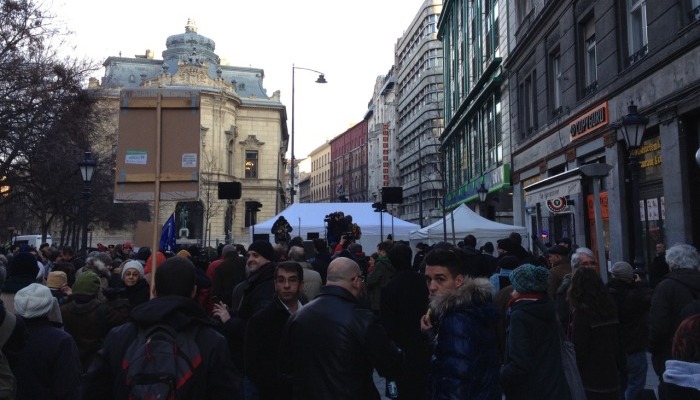 A few hundred protesters gathered in front of Budapest’s Ervin Szabó Public Library this afternoon to protest the government of Prime Minister Viktor Orbán.  Originally scheduled to be held in the Pollack Mihály square, where German Chancellor Angela Merkel was scheduled to arrive in late afternoon, the demonstration was relocated after Hungary’s Counter Terrorism Centre decided this morning to close the entire square.  Hungarian police practically sealed the surrounding streets off, making the demonstration accessible only through Kalvin square. Among participants there was Gábor “Tuareg” Szabó, leader of “Assembly of the Country” Movement, whose own protest was made “invisible” by Hungary’s Counter Terrorism Center (TEK) by forcibly removing his encampment after midnight. 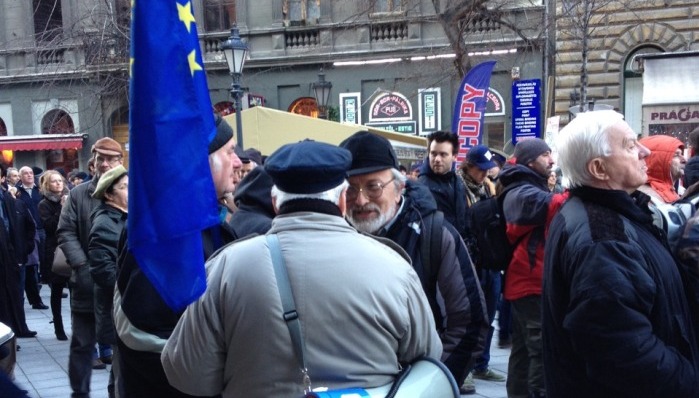 The event was opened by actress Lilla Sárosdi, member of Krétakör Foundation. She told demonstrators she was confident one day Angela Merkel would devote more time for a Budapest visit, and that she is proud of the fact that her name – among others – is already on minister János Lázár’s desk following today’s incident. Sárosdi emphasized that “for the paranoid little pricks” (meaning the Hungarian government) Merkel “is only a woman.”  “This is not surprising, as the ‘family friendly’ government sent Hungarian women back to the kitchen,” she told the small crowd.

“We, Hungarian women can only hope that one day, one of us will be prime minister or president,” Sárosdi said before leaving the stage. 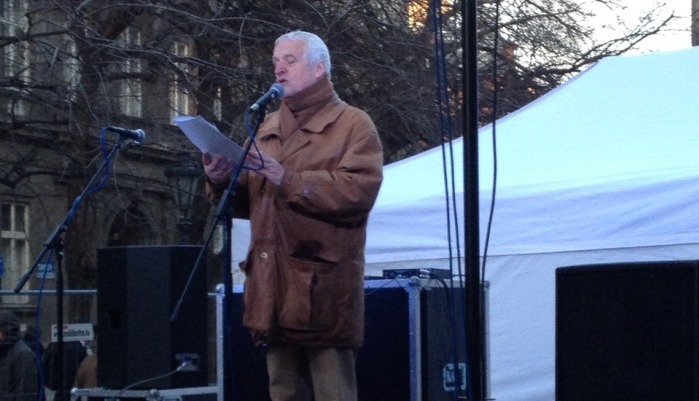 Hans-Henning Paetzke, a German expat writer living in Budapest, said he had already achieved persona non grata status both in his original and chosen country. Paetzke addressed the crowd both in German and Hungarian saying that “Believing that we are capable of bringing about an apolitical discussion space is a fatal illusion.” He told the story of how he had been sidelined in Communist East Germany, when he was denied admission at all the high schools of the country and was forbidden to work as a young actor, and even served a prison sentence for refusing to enroll in the army, as he was not a member of the Communist youth movement.

Paetzke said that compared to this, Kádár-era Hungary, where he ended up in 1968, felt like “redemption.”  Yet in 1985 even the Hungarian party premier “presented” him with the title of persona non grata. The fall of the iron curtain filled Paetzke with joy, only to get bitter again “as the Hungarian political elite proved to be a bunch of stealing magpies,” and it soon dawned on him that things were getting worse.

According to Paetzke, the Hungarian opposition is fragmented and is only interested in getting political positions, not caring about what happens to the poor. “The Hungarian state system is rotting once again, exclusive friendly circles close up, and intellectuals do nothing but complain. Wake up, before Hungarian democracy will be lost for more than a generation!” Paetzke warned his audience. 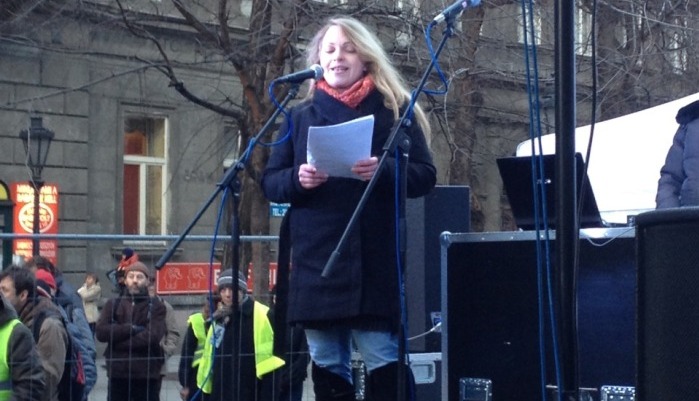 Organizer Bori Takács was the last speaker, heavily criticizing the Counter Terrorism Center for banning them from the original place of the protest. “We are not afraid,” she added. Takács also sent a message to Chancellor Merkel, asking her not to be a “silent partner of our tyrant.” According to Takács authorities do not uncover but instead cover up corruption, and meanwhile “the government is selling the country to Putin. ‘NowUs’ organization’s vision is to foster a wide consensus among Hungarian citizens about the need for fair elections, proportionate taxation and a social care system. We believe in the rule of law, and we will eventually restore it,” Takács concluded.

Hungary’s Counter Terrorism Center disregarded the law when it banned a protest previously registered with the police, the Hungarian Helsinki Committee wrote on Monday in a statement.

TEK’s decision, which is available on their webpage, uses a frequent legal backdoor, based on which since the end of 2006, Kossuth square could be cordoned indefinitely. The same measure was used a few years ago, when a protest in front of Sándor Palace, Hungary’s presidential office, was banned.

The present TEK decision is tantamount to banning an already registered protest, that is unconditionally illegal. According to effective law, any assembly could only be forbidden with a notice 48 hours in advance of the event. This had long passed by Monday morning.

According to Helsinki, the Counter Terrorism Office is also wrong to base its decision on the Vienna treaty, as it does not apply to Angela Merkel’s visit. Article 1 of the agreement clearly declares that a diplomatic representative (protected by the receiving state) is either a leader of the diplomatic mission, or member of the diplomatic corps of the given country. Merkel is neither, and such measures cannot be applied to her visit.