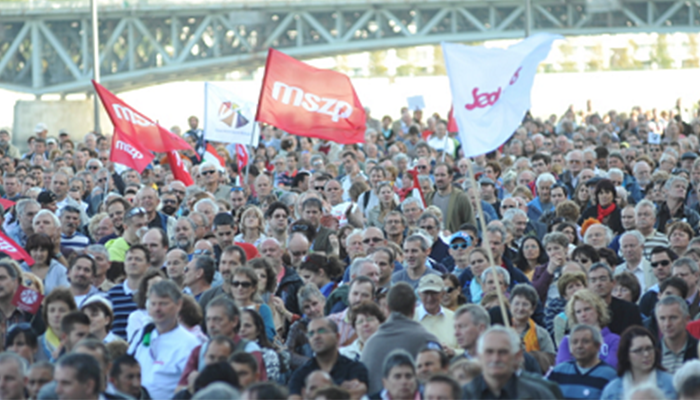 In a joint rally held Wednesday afternoon opposition leaders took turns denouncing the Fidesz led government and calling for greater cooperation among opposition parties in the lead up to next year’s parliamentary elections.  Held on the right bank of the Danube in front of the Budapest Technical and Economics University where the 1956 revolution began, the event’s symbolism was not lost on the tens of thousands of opposition supporters that flocked to the event’s staging area.

Hungary’s political landscape changed drastically in the wake of 2010 parliamentary elections when low opposition voter turn-out delivered a land-slide victory to Fidesz-KDNP.  Within a year of taking office Fidesz-KDNP used its two-thirds parliamentary majority to adopt a new constitution and to pass a number of cardinal laws many critics claim undermine Hungary’s system of checks and balances.

First to speak was Milla Movement for a Free Press founder, Together 2014 (E14) co-Chairman Peter Juhasz. “Fidesz has only been fair in treating everyone unfairly” he told the crowd.  “This is the Hungarian invention with which we will get rid of Viktor Orban!” cried Juhasz, calling on the crowd to lift up their ball point pens.

He was followed by former prime minister and Together 2014 (E14) co-Chairman Gordon Bajnai.  “I know the past year brought disappointment”, said Bajnai referring to prolonged, on-again off-again negotiations among opposition party leaders.  “But I want you to know my belief, determination and goals haven’t changed.  In 2014 we Hungarians must choose a future: Orbanistan or Hungary.”

Former Fidesz and SzDSz politician, Klara Ungar, then told the crowd that, whereas 1956 revolutionary hero Imre Nagy went from being a communist to being a democratic and a patriot, “Viktor Orban’s path is the reverse of Imre Nagy’s.”

She was followed by the only conservative politician to take the stage that day, Movement for a Modern Hungary Chairman Lajos Bokros.  “That party which believes in greater state redistribution of wealth, that increases taxes, nationalizes, promotes its own businesses, intimidates public employees, humiliates the poor, and increases government regulation is not a right wing party,” said Bokros.  “That is a new communist party! We must not wait until the new communist government can only be replaced through revolution!”

Next up was former leading SzDSz politician Gabor Kuncze who in a sobering speech said “the majority of voters want to get rid of this government and yet  if the election were held today Fidesz would win.”  Claiming opposition cooperation was being “worn down” by petty bickering among opposition leaders, Kuncze warned “if the Orban mafia government remains on our backs that won’t be their success but our shame.”

Following Kuncze Former prime minister and Democratic Coalition (DK) chairman Ferenc Gyurcsany took the stage to enthusiastic applause.  Strongly criticized for his role in events leading up to Fidesz’s victory in 2010, Gyurcsany has reemerged as one of the most vocal leaders of the political opposition.

An engaging speaker known for his strong statements as of late Gyurcsany told the crowd “I know Viktor Orban.  I twice played a role in his defeat.  I know that today Hungary is led by a lying scoundrel.”  Gyurcsany criticized as neither “timely” nor “democratic” the agreement signed by MSzP and Together 2014 on Tuesday in which the two parties agreed to cooperate in next year’s parliamentary elections.   Gyurcsany urged the opposition parties to agree on a joint list of candidates and to choose a joint leader capable of leading them to victory.  “Who is not capable of doing this, whose personal ambition prevents us coming together, that person needs to rethink his role.  Because in this there can be no compromise” Gyurcsany said.

Following Gyurcsany was Hungarian Liberal Party (MLP) chairman Gabor Fodor who told the crowd that “in contrast to 1956 today Hungary is not threatened with colonization from without” but “from within” referring to Fidesz’s far-reaching reorganization of the country.  “A year ago we had reason to believe in the strength of the opposition.  Does the belief still exist?” Fodor asked,echoing Gyurcsany’s and Kuncze’s concerns. “If the goverment isn’t performing better, is the opposition performing better?”  Fodor told the crowd that the opposition had “lost a very important year.”

Next to speak was Dialogue for Hungary (PM) co-Chair Timea Szabo. “In 2010 a lot of people really thought Fidesz wanted change,” said Szabo in a strong, confident voice. “Not since the system change has a politician or political party let us down as much as Viktor Orban and Fidesz have during the past three years.”

Last to take the stage was Hungarian Social Party (MSzP) chairman Attila Mesterhazy.  A short way into his speech he was interrupted by DK supporters and other members of the crowd chanting “Come together! Come together!” Taking a few seconds to settle back into his speech, Mesterhazy said “we need to acknowledge that we are not one another’s enemies.  Our enemy, our opponent, is Viktor Orban and his unjust, corrupt, lying system.”

Conspicuously absent Wednesday’s rally was trade union political movement Szolidaritás leader, Together 2014 co-chair Peter Konya whose leading role in last month’s symbolic toppling of a fake bronze statue of Viktor Orban was widely criticized by opposition leaders, including members of his own alliance.

The event was brought to a close with the singing of the Hungarian national anthem.  Ovations quickly quieted down as the mournful opening strains began.  When not singing everyone remained perfectly silent in what was perhaps that day’s greatest display of unity.