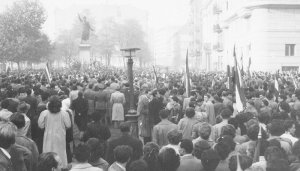 On 23 October 1956 the Hungarian people rose up against their Soviet-backed government. Members of the dreaded state security police (ÁVH) were strung up from trees and lampposts after they fired on student demonstrators. Soviet troops stationed in Hungary hastily left the country.  They returned in force on 4 November to brutally topple the new government of Imre Nagy, pitting tanks against lightly armed protesters in the streets of Budapest.  Imre Nagy was arrested and secretly executed.  Many thousands of protesters were killed and imprisoned.  An estimated 200,000 Hungarians fled the country.

For 33 years Hungarians were taught that 1956 was a failed “counter-revolution” by imperialists in an attempt undermine the democratically elected government of peasants and workers.  Although many had first-hand knowledge and experience of the events in question, almost none dared talk about it.  It was not until the fall of communism in the summer of 1989 that the revolution of 1956 became the subject of public discourse and historical inquiry.

The historic and symbolic importance of the Hungarian revolution of 1956 was not lost on the political parties overseeing Hungary’s transition from a one party state to a pluralistic democracy. They chose its 33rd anniversary to announce the birth of the Third Republic of Hungary.

Since then Hungary’s various political parties have chosen to commemorate these events separately, with each party staging its own wreath laying ceremonies and political rallies.  This year marks the first time the main constitutional opposition parties will jointly commemorate this important event.

The message to the Hungarian electorate of the united opposition will be clear:  Hungary’s constitutional opposition parties have agreed to put aside their doctrinal and programmatic differences and join forces in order to defeat the government of Viktor Orban in next year’s parliamentary elections.  Liberal parties Politics Can Be Different (LMP) and 4K! declined to participate.

In a statement sent to the Beacon from DK newcomer, former Los Angeles Consul General Szabolcs Kerek-Barczy writes, “(t)he mere fact that leaders of a wide range of democratic parties stand on the same stage is important. It will be a political event both commemorating the revolution and expressing our current desire for a democratic Hungary.”

Dialogue for Hungary provided us with the following statement:

“In a fair electoral system many of the parties who will be on stage on 23 October would be competing in an open and even-handed electoral race.  In the upcoming gerrymandered Hungarian elections this is not possible.  Thus all opposition democratic parties agree on a common goal: ridding the country of the Orban regime.”

“The present Hungarian government has changed the electoral rules and it is now a first-past-the-past system. Under these circumstances only a unified opposition candidate will have the chance to win the mandate in individual constituencies.  In order to get rid of Fidesz which has destroyed the rule of law and implemented an unorthodox economic policy causing great harm to the Hungarian economy, it is a political imperative, as well as a moral obligation to create a strong unit of the democratic opposition.  On 23 October we will establish a favorable emotional framework to achieve this goal.  That is the only way to restore democracy in Hungary.”

According to the latest Ipsos survey the opposition parties sharing the stage on Wednesday enjoy the support of 23 per cent of all Hungarian voters surveyed and 37 per cent of those who are certain to vote in next year’s parliamentary elections.  The same survey put Fidesz-KDNP’s numbers at 26 per cent and 49 per cent, respectively.