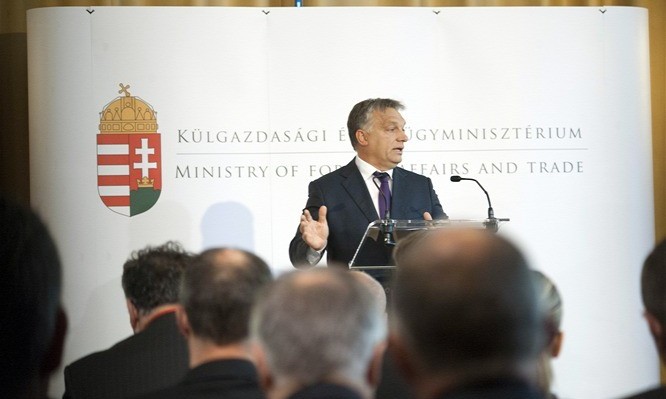 Hungary’s Prime Minister expanded on his theory of ’illiberal democracy’ on Tuesday as it pertains to EU immigration policies in his annual speech to members of the Hungarian diplomatic corps.  Viktor Orbán justified his anti-immigration policy primarily in economic terms, arguing that rather than seeking to import workers, EU states should focus on providing jobs for the EU’s 10-million strong Roma community.

According to Orbán, “States that follow the liberal understanding support immigration, and after great debates EU documents mostly represent this kind of understanding. We are at the point where not only legal but illegal migrants have certain rights.” He added that

“In certain media reports I see illegal immigrants holding up a sign reading ‘I’m not a crime’’. But they really are a crime. There are rules that tell you how you can legally enter a country, and if somebody does not follow them, then he violates the law. So the kind of thinking excusing such activities based on some kind of moral grounds is a completely liberal attitude in today’s Europe and profoundly differs from our understanding of the matter”.

Orban said Hungary would “like to remain a homogenous culture” and “illegal immigrants from outside Europe would endanger such a situation”.

Márta Pardavi, co-chair of the Hungarian Helsinki Committee, said Orbán’s speech was “more radical yet had less substance than anything ever said on the topic of immigration by any EU leader”. She told The Budapest Beacon that “Orbán was wilfully mixing up the notions of refugees and economic migrants, while being extremely hostile to both groups. While being outspokenly hostile to immigrants, the prime minister also endorsed opposition to unified EU regulations on the issue of immigration and refugees,” according to Pardavi.

Pardavi believes Orbán was trying to tap growing xenophobia in Hungary despite immigration being a marginal issue in Hungary given the low number of migrants who stay in the country. In a Tárki survey conducted in April 2014 some 40% of Hungary’s adult population agreed with the statement: “no asylum seeker should set foot in the country”, up from 29-32% in earlier years. Only 11% of the respondents said all immigrants should be allowed to enter the country. “Orbán is trying to be an anti-immigrant in a country where the immigration problem practically does not even exist,” according to Pardavi.

Political and social unrest in parts of central Asia and the Middle East causes many refugees to attempt to enter the EU illegally through neighboring Serbia. According to official police statistics 58.6% of irregular migration during the first half of 2014 activity took place at the Serbian border in Csongrád county. A total of 8,879 illegal border crossing cases were detected in Csongrád county. East of there in neighboring Bács-Kiskun county which borders fellow EU member state Romania, the number of illegal border crossing cases was only 1,179, roughly half that experienced during the first half of 2013.

While the number of border jumpers is falling, there are more and more smugglers, mainly Serbian, Hungarian and Romanian. Just last week more than 180 irregular migrants were caught trying to enter the country, 60 of these via Serbia, including 21 children. They were mainly Afghan and Syrian refugees attempting to enter the Schengen zone in eight groups. Meanwhile a Serbian smuggler aiding families of illegal refugees over the border was arrested, and legal procedures have been launched against each migrant.

During the period anuary-July 2014 some 6,500 refugees arriving to the country. Although immigration and asylum detention centres are less crowded than last year, they continue to be overcrowded, leaving vulnerable asylum seekers without sufficient care.

Immigration and asylum procedures in Hungary are anything but friendly according to Pardavi, adding that Hungarian immigration authorities are extremely strict and can exercise personal discretion on a number of issues, rendering foreigners’ fates unpredictable. And it is for this reason the number of expats in Hungary from other countries from both within and without the EU remains relatively low.

While the Czech Republic has responded to falling birth rates and the westward migration of its workforce by liberalizing its immigration policies, Hungarian immigration authorities continue to take a hard line, often failing to justify detention, especially in the cases of asylum seekers under the age of 18 who are frequently detained with their parents despite the EU ban on detaining minors. Currently most asylum seekers in Hungary are Afghans and Syrians. The latter group are usually eligible for a ’subsidiary protection’ (“oltalmazott”), making it almost impossible for them to unite with family members in other countries.