Viktor Orbán: We don’t want a new Wall to the East 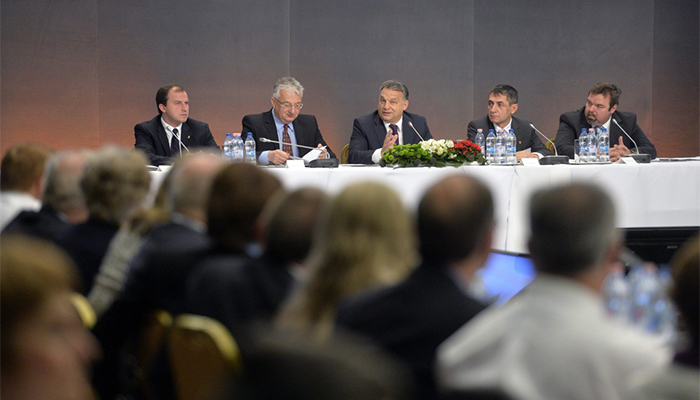 The most legitimate effort is to strengthen the unity of the nation.  And whenever this is missing, we should create it.  …  Ideals and principles are important but national interests are more important.  … One has to represent national interests within the EU eloquently but firmly. This is what it means to be a European. … We will be loyal to our NATO allies even if we do not share even 50 percent of what they say and think.  – Viktor Orbán, Prime Minister of Hungary

Addressing Hungary’s Diaspora Council in Budapest on Wednesday evening, prime minister Viktor Orbán said his government had been successful in defending Hungary’s sovereignty and its “Christian nationalist values” against the European “mainstream.” He added, however, that his government “does not want a new Cold War” in the center of Europe.

The annual conference and proceedings of Hungary’s main lobbying body for ethnic Hungarian diaspora, the Diaszpóra Tanács (Diaspora Council) started on Wednesday in the representative recently renovated Buda Castle Bazaar. Orbán gave a one-hour introductory speech in which he identified key, long-term strategic approaches of his government concerning the situation of ethnic Hungarians around the world.

“National unity is a natural state of mind and sentiment for the incumbent government. Whatever anybody says or whatever reference is made to modernity and the changing global perspectives, for us the most legitimate effort is to strengthen the unity of the nation. And whenever this is missing, we should create it. Consequently, the government that is presently responsible for public policy in Hungary is a national and patriotic government. Our fundamental starting point is that we are all Hungarians, and as such we all belong together. This designates some really important duties and obligations for the government exercising public power.”

Orbán addressed the question of “new walls and political fractures” within Europe. Remembering the 25th anniversary of the regime change, he stated that back then he and other members of the 89-er generation were “dreaming about a free Europe as well as a free and independent Hungary. We thought that the uncritical adoption of Western-type models will automatically resolve our problems. We thought that neoliberal free market policies will inevitably lead us to a welfare state. This was not without any reason.  This was the zeitgeist.”

The prime minister still thinks, however, that most of the history of the new Hungarian democracy between 1990 and 2010, not counting his administration between 1998 and 2002, was about “selling out the wealth of the nation and applying for state loans to sustain the illusion of a welfare state. Thus Hungary became once again the ‘happiest barracks’ of the 2000s, only this time within the EU (instead of the Soviet Union).”

Orbán thinks state indebtedness and “public bonded labor” created by the FX loan schemes resulted in Hungary being the first country to completely collapse during the 2008 financial crisis, even before Greece. “The perspectives for Europe to get out of such a crisis are bleak,” said the prime minister, meaning that the Eurozone will not completely recover even within the next few years, which will have an effect on Hungary.  The effect of this domestically according to Orbán was that the present Hungarian government started to follow the “ideology of common sense.” According to Orbán this ideology poses the ultimate challenge:  “If we are strong, then we will live a free and rich life.  If we are weak, we will fail once again.” Orbán also added that, as always, Hungary must resolve its problems “on its own”.  “No foreign intervention will help our situation,” said the prime minister, adding that such hopes are “the clear heritage of the era of Soviet occupation”.

Orbán concluded his analysis of the financial crisis by stating that “it is hard to break the habit of constantly relying on a big imperial power to handle our problems instead of ourselves.”

He emphasized that it is for this reason Hungarian national interests stand at the center of his government’s politics, as well as “restoring sovereignty.”  He elaborated that Hungary needed a new Fundamental Law primarily to do away with communist heritage, adding that other former Eastern bloc countries had prepared their new constitution well before EU enlargement and in doing so spared themselves a lot of debates and controversy, while the Hungarian constitution in effect before 2013 “remained debated” for a long time due to its “communist heritage”.  “Polish, Czech or Slovak constitutions were not ever debated in the EU like ours, as when they took effect these countries were not yet members of the EU itself,” said Orbán, adding that the adoption of a new constitution “was a success.”

Orbán did not forget to criticize the values of “contemporary Europe” and its liberalism, or to contrast it to his understanding of a “traditional life” and “loyalty to the nation”:

“Our constitution is perfectly in line with the principles of the EU, however is free from the definition of freedom offered by our opponents that denies gender identity, denies the fact of humans being created by God, as well as obligations to one’s nation and homeland. According to them a really ‘free’ person is somebody whose gender is unknown, is not restrained by any belief whatsoever, and belonging to a nation is more like a faint memory for them than a natural law defining everyday reality. I know that I am making a lot of simplifications here but more or less this is what we can call the zeitgeist of contemporary Europe.”

Orbán views the Fidesz constitution, with its emphasis on “Nationalist Christian values as well as respect for the family”, as an institution, as a kind of “bomb” blast to this mainstream understanding.

Economic self-determination is important even within the framework of the globalized economy. Orbán reflected on the debate surrounding the topic in Hungary by declaring that “We do the same thing Germans and Americans do, that is, pursue our own national interests.” He added that “denial of national self-determination is an exclusively communist thought.”  He said the pursuit of Hungarian “politics of self-determination” resulted in the “removal of IMF” from Hungarian economic life. The prime minister defined the last motion as a “big success.”

Orbán characterized his policy approach towards the EU as “leaving behind servile forced compliance and starting to behave like real Europeans in Europe”. He thinks this is what happened after his government took power after 2010. “One has to represent national interests within the EU eloquently but firmly. This is what it means to be a European.”

Summarizing his government’s plans for the next four years, Orban said it will include an “unprecedented economic growth program”, introducing broadband internet connection to every Hungarian household, extending highway routes to every major Hungarian city, and the radical reduction of state bureaucracy. Hungary “will reach total employment of its adult population by 2018.”

Commenting on Hungary’s standpoint on the Russian-Ukrainian conflict, the prime minister reacted to several attacks this has attracted. “We have a geopolitical situation that is factual. These are facts. We have more powerful and bigger neighbors to the East and to the West. Germanic people to the right, Slavic to the left, a bit farther the Russians. So ideals and principles are important but national interests are more important. Consequently, we will be loyal to our NATO allies even if we do not share even 50 percent of what they say and think.” Orbán concluded by suggesting the West consider the “dodgy but very effective politics” followed by Austria, a country that is also part of the South Stream construction project but not a member of NATO. “We do not want a new Cold War. I grew up in a new Cold War and have no wish to end my life in another one […] But we will express our discontent to anyone when we see our national interests being harmed. We do not want a new Wall to the East,”  Orbán concluded, explaining his take on Hungarian Realpolitik.

As the press was only allowed to cover Orbán’s opening speech and not the subsequent meeting, it is not known to what extent representatives of the Hungarian diaspora agree with the prime minister’s views.  A number of prominent American-Hungarians, including Hungarian Spectrum publisher Éva Balogh and US Foreign Policy expert Charles Gati believe Orbán’s “Christian nationalist” policies has done inestimable harm to Hungary.  This attitude is shared by a large number of Hungarian expatriots as well, including media freedom and human rights expert Miklós Haraszti.