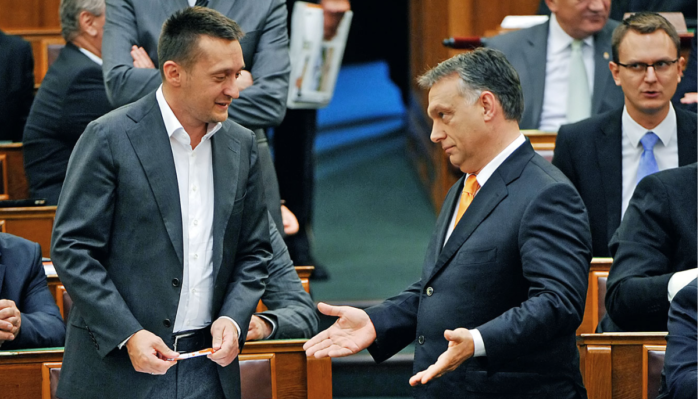 Any accusation or proof of corruption against so-called propaganda minister Antal Rogán (left)  is a “political bluff” according to Prime Minister Viktor Orbán (right), who told parliament yesterday that he does not concern himself with “attacks” against members of his government. Responding to questions from Politics Can Be Different (LMP) MP Bernadett Szél about Rogán repeatedly being caught lying to the press, Orbán claimed that “every single attack until now that they’ve made against minister Antal Rogán has strengthened minister Antal Rogán’s position.”

When Szél asked the prime minister, “When will your trust finally run out concerning Antal Rogán?”, who is arguably the third most powerful politician in Hungary, the head of government responded that as he sees it, Szél is always picking out one of his ministers to harass, and Rogán is merely the latest. Szél enumerated several examples of Rogán lying to the press in recent months, including specific mention of a luxury helicopter trip he took to a celebrity wedding and then lied about, and his initial denial of having a connection to an attorney suspected of assisting in his nefarious dealings, after which video evidence emerged to prove he had lied again. (Rogán changed his story a couple of hours later, claiming he had merely dropped by for a coffee with the mysterious lawyer.) Szél also cited Rogán’s recent appearance on an ATV program during which she said he had made four untrue statements about Hungary’s controversial residency bond program, of which he is the architect.

Other politicians asked Orbán to respond to widespread concerns that one of his highest ministers is continually involved in scandals and then lying about them. Socialist politician Tamás Harangozó asked Orbán what would have to happen for the prime minister to replace Rogán.

“With every single attack I’ve heard on this subject my confidence in my minister increases,” Orbán said in response.

Jobbik MP György Szilágyi then asked Orbán why he tolerates lying within his government. Orbán responded by confirming that he is entirely indifferent to direct proof of repeated lying and probable corruption in the highest levels of his government.

“These are bluffs,” he said. “Don’t think that this news shocks us or that we are thinking about it at all.”