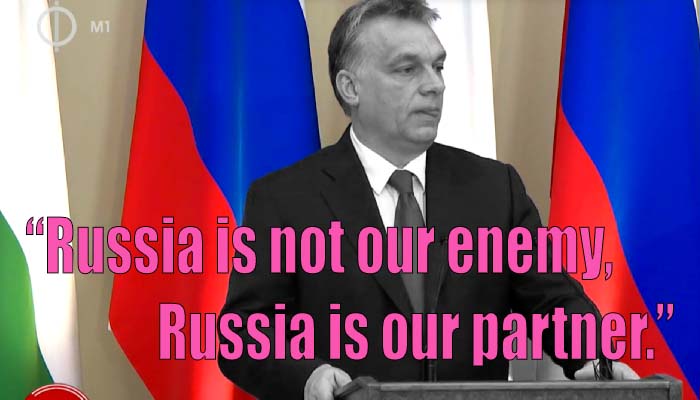 Prime Minister Viktor Orbán and several members of the Hungarian government paid an official visit to Moscow on Wednesday, one day before he was to attend a high level EU summit in Brussels. Nobody really understands why apart from sending a clear message to Western leaders that Hungary and Russia are friends.

The Moscow summit took place one year after last years controversial visit to Budapest by Russian Federation President Vladimir Putin’s.  The Russian economy continues to be heavily impacted by Western sanctions and low oil prices. All in all, a visit from the head of government of an EU member state was a great photo-op for the Russian president. He can still show Russians he has allies in the West.

At a press conference after the meeting. Russian Federation President Vladimir Putin said the talks were “constructive and good-natured”, that Hungary was “an important and trusted partner in Europe” and a country working for a friendly relationship with Russia. Putin said a number of bilateral agreements were signed.

The Russian Federation President acknowleded that trade between Hungary and Russia has been impacted by falling oil prices and EU sanctions. Despite the sanctions, Putin praised the expansion of Hungarian pharmaceutical company Richter-Gedeon into the Russian market. He said the primary focus of Hungary-Russia trade is in energy.

Referring to the controversial Paks II nuclear plant expansion in Hungary, Putin said Russia’s state-owned atomic energy company, Rosatom, would carry out a complete “modernization” at Paks with “the most modern Russian technology” and that its involvement in the expansion would further help Hungary’s energy independence.

(Critics argue that it will only deepen Hungary’s dependence on Russia as only Russia will be able to supply the necessary fuel rods-ed.)

On the conflict in the Middle East, Putin said Hungary and Russia are on the same page about resolving the issue. When referring to the consequences of the crisis, Putin used the term “refugees”, whereas Orbán stuck with the term “migrants”.

He said he still considers the Paks II agreement to be “the deal of the century” and “the international debate surrounding [it] is totally baseless”.

“We have been cooperating since the 1960s, and this agreement is nothing more than a prolongation of this agreement,” Orbán said. “So instead of criticism, we should thank Russia for keeping with the agreement that was signed in the 1960s.”

He went on to say he hopes Hungary’s automotive industry will someday be able to work together with Russian automobile manufacturers. All in all, it is very difficult to tell why it was so important for such a high-level delegation from Hungary to travel all the way to Russia for meetings one day before a key EU summit in Brussels.