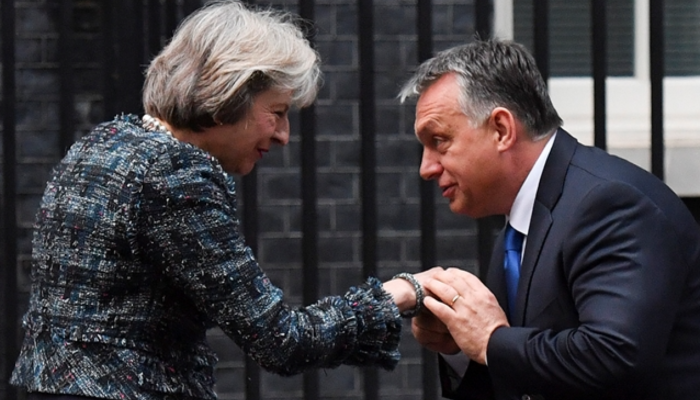 Prime Minister Viktor Orbán met with his British counterpart Theresa May in London Wednesday, where Orbán reportedly emphasized the importance of protecting the rights of Hungarians living and working in Great Britain should that country leave the EU, reports portfolio.hu.

“They discussed the rights of EU citizens living in the UK and the prime minister reaffirmed that she wants and expects to protect the status of EU nationals, but that British citizens’ rights in European member states must be protected in return,” a Downing Street spokesperson said.

That protection would be reciprocal, May said, meaning that if the rights of British citizens working in the EU are not curtailed, then the UK will not curtail the rights of EU nationals working in Britain. This was an important outcome of the talks, Orbán said, since many tens of thousands of Hungarians either work in Britain or for British-owned companies in Hungary.

“They have interests which we must protect,” Orbán said. “So it is in our interest that the trade aspect of British-Hungarian relations should continue to be open and free in the future.”

Unofficial estimates put the number of Hungarians currently residing in the United Kingdom at well over 200,000, and their fate seems uncertain since the Brexit referendum in June determined that the UK would step out of the EU. May told Orbán at their meeting that, despite the pending Supreme Court appeal over her government’s authority to leave the Union without giving MPs a vote, she would begin the formal process of exiting the EU by the end of March as planned.

The two leaders also discussed immigration and border control–issues that have put Orbán at the forefront of a policy debate within the EU on the refugee crisis. EU leaders earlier expressed concern that by meeting with Orbán, May may seek to “divide and conquer” EU member states in order to give herself a better position in negotiating the terms of her country’s exit.

“On migration the prime minister laid out her position that we should ensure that refugees are hosted in the first safe country of transit; that we distinguish between refugees and economic migrants; and that all states have the rights and responsibilities to control their borders and accept returned illegal migrants,” said the Downing Street spokesman.