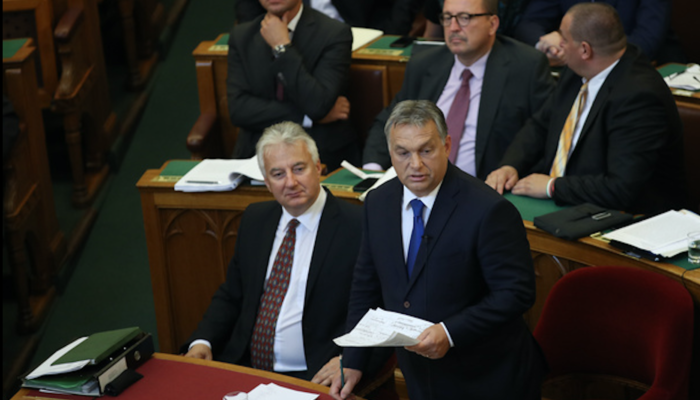 “Fidesz insanity has reached a new level, because they want to suggest that a city mayor can negotiate with the president of the European Parliament about migrant settlement.” – László Botka, Mayor of Szeged

Prime Minister Viktor Orbán opened the fall parliamentary session Monday with a provocative speech. According to Index.hu, Orbán reassured the parliament that the country is in much better standing than four years ago, and that finally there is a bright future to look forward to.

However there are some minor snags. “We are in the heart of Europe, which is experiencing sinister times. Terror and violence have become a part of European life,” Orbán warned, adding that the policies of Brussels “will lead to civilizational catastrophe.”

His government is standing up to these apocalyptic policies by holding a referendum October 2 against the EU refugee resettlement quota. In his Monday speech, the Prime Minister added a novel caveat: if Hungary refuses to accept the refugees, then Brussels will make deals with left-wing Hungarian cities and districts to settle them. He specified the cities of Szeged and Salgótarján, and the Budapest district of Zugló, all of which are led by left-wing mayors.

Everybody on the bandwagon

Fidesz party faction leader Lajos Kósa responded to the opposition’s outcry by citing a March letter from European Parliament president Martin Schulz, in which he praised Szeged as a “committed left-wing city, where any refugee can be sent.” The Socialist Party (MSZP) did not protest the statement which, according to Kósa, indicates they support it and are conducting secret deals with Brussels to settle immigrants.

However, socialist mayor of Szeged László Botka did respond to Schulz’s statement in March, saying the reason his city may have come to the EP president’s mind was because right before the height of the refugee crisis in Hungary, Schulz visited Szeged, which at that time was “international news, because the refugees moved through here without conflict, and Szeged residents voluntarily brought things to eat and drink to the people.”

Fidesz MP Szilárd Németh also responded to Schulz’s letter by leveling accusations against Botka, asking him what kind of career he was promised in Brussels in return for settling refugees, and in which part of Szeged he plans to erect the refugee camp.

Botka told Index.hu: “Fidesz insanity has reached a new level, because they want to suggest that a a city mayor can negotiate with the president of the European Parliament about migrant settlement. This is so surreal that I don’t even have any words against it.” He called Németh’s words “baseless and untrue attacks.”

Meanwhile, in the north…

The other places Fidesz accuses of conspiring with the EU have also responded to Orbán’s statements. Zugló mayor Gergely Karácsony emphasized that there will not be “migrant settlements” in the Budapest district, adding that it “has not and will not make deals with Brussels about any kind of migrant settlement.”

During a special election in February after the death of the Socialist mayor of the northern border city of Salgótarján, Fidesz representatives in the city tried to expose migrant-loving leftist representatives by drafting a resolution to ask the local government to reject the EU resettlement quota. However, the Fidesz politicians were surprised when the city’s left-wing majority added an amendment to the resolution, stating it wasn’t enough to merely reject the quota, but that they must also legally ensure that the Hungarian government cannot unilaterally settle refugees in Salgótarján.

After the left added their short amendment to the Fidesz resolution, a vote was held in the local assembly. The left approved the resolution while Fidesz decided to abstain, resulting in the unusual situation of the ruling party not voting to ban a refugee camp from the city and the leftist majority aligning itself with the government’s stance.