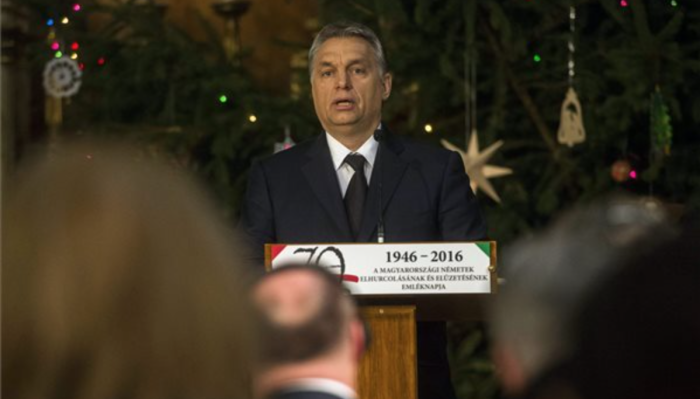 Whenever Hungary was invaded from the West or the East it resulted in immeasurable suffering, said Hungarian Prime Minister Viktor Orbán on Tuesday at a memorial ceremony marking the German deportation and expulsion following the end of the Second World War.

The Hungarian head of government told those gathered at Budaörs’ Nepomuki Szent János church that the Twentieth Century bares witness to the fact that when Hungary loses its independence, its own citizens are driven out, robbed, persecuted and rendered highly vulnerable.

“We will not offer the slightest chance of such a world coming in which similar ordinances or lists can be created,” said the Prime Minister.

Seventy years ago Hungary and other European countries saw the deportation of their ethnic Germans, Orbán said, adding that  not a “single sober-minded person” challenged the deportations, “not even among the allied powers”.  He said “Europe capitulated” to both Nazism and “international socialism”. The “sad common denominator” between the two ideologies was their willingness to “load entire peoples into cattle wagons”.

Orbán said the desire to prevent such atrocities was a deciding factor in Europe’s reunification. However, he added that Europe’s security is gradually deteriorating and its way of life built on Christianity is at risk.  He said the question today is not whether the European nations will turn against one another, but rather whether Europe will continue to exist.

“May God give us sufficient strength so that we can realize the right to remain in the land of one’s birth outside of Europe as well.”

German government commissioner for emigration and ethnic minorities, Hartmut Koschyk, said the memorial day honouring Hungary’s ethnic Germans is a “good European example” of confronting the past, and thanked the Hungarian parliament, the government and the Hungarian people for observing it.

The ceremony concluded with a wreath-laying ceremony.